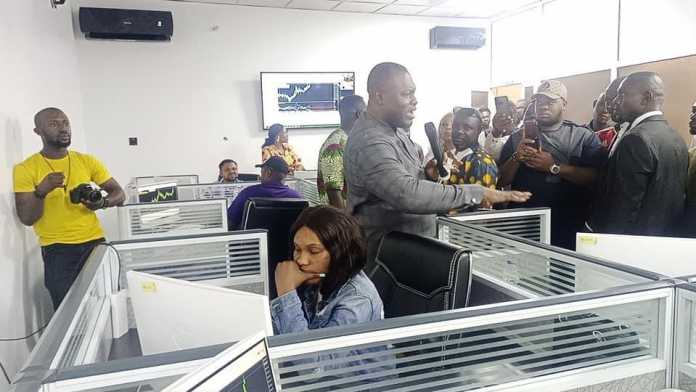 The President/Chief Executive Officer of Baraza Multipurpose Cooperative Society, Miebi Bribena has returned to Yenagoa, the Bayelsa State capital after a one week trip outside the country.

Miebi Bribena in a live video on his personal Facebook page on Tuesday, was seen having an interactive session with some investors, where he debunked reports that he had absconded because of the recent challenges confronting Baraza.

He later took a tour round the trading studio of Baraza, intermittently posing for photographs with some staff and investors of the Cooperative Society.

In another video, Miebi Bribena was also seen presenting a car to a lady as part of the Baraza car acquisition plan, announcing that more of such packages will come for those who had registered in the various empowerment plans of his scheme.

An investor of Baraza who is close to the management, said the return of Miebi Bribena was to douse the growing tension and outrage over delayed payment.

The investor who pleaded anonymity said it was the best decision he took to come back, as the story of his alleged relocation to a foreign country was beginning to unsettle investors of the Cooperative.

“It was like a maststroke to beat his accusers. It was an important decision to come back, because the news that he has fled further sparked panic but seeing him today has assuage our feelings and we hope that he will now settle down to do the needful”.

Meanwhile, more investors in the scheme have been speaking on the issue of delayed payment despite reports that some persons were recently paid in what they said may have become a “man know man” arrangement.

Another investor, Phillip Jude while venting his frustration on the official page of Baraza said: “I just spent my last card baraza help my life abegggg. I’ve been due march 4th file number 5797. I’ve submitted my acct statement on march 8th. my acct officer said I’m scheduled for payment… since march 4th till now I haven’t received anything”.

Also, Nwadinigwe Rita appealed to the management of Baraza to refund her money back. According to her, she and others need their money back as they are no longer interested to continue as members.

On her part, another investor, Juliet Peniel John said: “Please I’m long over due for payment since 16th of March. Been to ur office twice with my statement of account, yet nothing has been done. Please pay me my money”.

VIDEO: “We Discovered some staff have stolen our monies to Open their own Cooperatives – Baraza CEO, Miebi Bribena Cry-out

Political Stories SAINT MIENPAMO - June 17, 2021 - 10:45 am 0
The presidency has mocked the Peoples Democratic Party (PDP) over the ban on Twitter in Nigeria. President Muhammadu Buhari’s spokesman, Garba Shehu in a statement...