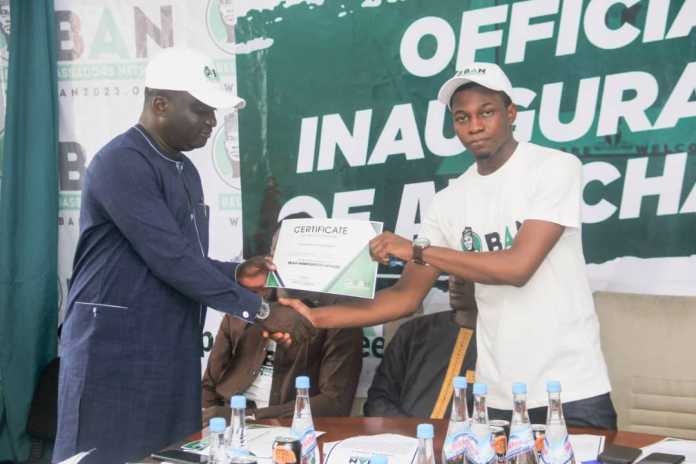 The event held on Monday was witnessed by the national leadership of the group led by the National President, Comrade Anthony Edogbo.

In his speech, the State Coordinator, Comrade Paul Ibara noted that he alongside members of the state chapter have been impressed by Governor Bello’s antecedents, charisma and pedigree, stressing that Nigeria needs a young, performing and charismatic leader as President in 2023.

Assuring the national delegation that the state chapter will vigorously promote and spread the Bello 2023 agenda to the nook and cranny of the state, also promised to recruit not less than 500 thousand dedicated members in the state.

He charged all inaugurated members to justify the confidence reposed in them.

Chapter Secretary, Otuekong UduakAbasi Ikpat, also harped on the need for Nigerians to root for a young and vibrant President who fully understand present concerns plaguing the country.

Speaking on behalf of the women, Glory Akpaudo appreciated Governor Bello for running a women-inclusive administration, and hoped for same to be replicated if he becomes President in 2023.

Addressing the gathering, National President, Comrade Anthony Edogbo, described Bello as a man with profound wisdom and leadership prowess.
He said his attributes of engendering youth participation in politics has opened the Kogi landscape for young and enterprising people throughout the country to contribute to the progress of his administration.

Edogbo said Bello is gender-friendly and highlighted other qualities which should endear him to Nigerians: “All the 21 Local Government Council Vice Chairmen are women. He works with everyone irrespective of gender, tribe and religion. This is a governor who has a female as his ADC. The SSG is also a female. He even built a chapel in government house for Christians despite him being a Muslim. Nigeria deserves someone like him.”

He discountenanced claims that salaries are not paid in Kogi State, saying as an employee of the state government who also has parents, family members and friends working for the state government, such claims are baseless.
The BAN National President explained that the salary issue came up as a result of backlog of unpaid salaries and gratuities inherited from previous administrations, as well as cases of ghost workers in the civil service. He said the Bello administration has long solved the issue.

He thanked the Akwa Ibom State Chapter for the support and encouragement.

Also in the delegation of the National President were Adulrahman Idoko, Haruna Moses, and Bani Motilewa.

‘All Nigerians’ Are Asking Me To Run For President, I Will Not Disappoint – Gov. Yahaya Bello [VIDEO]