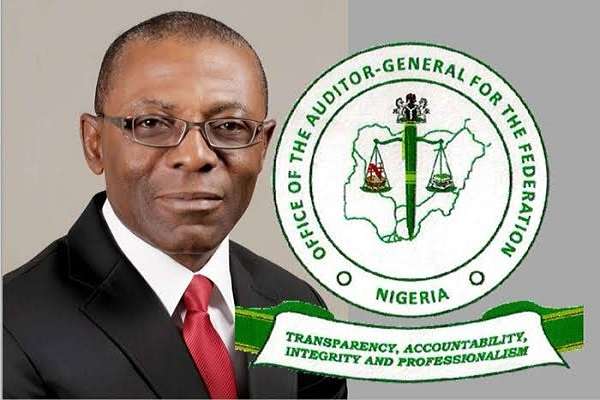 Federal Ministries, Departments and Agencies (MDAs) maintained N4.973 trillion unsubstantiated balances in their accounting records in 2019, it was learnt yesterday.

The Auditor General of the Federation (AuGF), Adolphus Aghughu, announced this when he submitted the 2019 Audit Report to the National Assembly in Abuja.

Aghughu regretted that his office was beset by a plethora of challenges which militated against effective detection of financial improprieties and misappropriation of funds by government agencies.

The AuGF said the agency’s workers in Lagos were about to be evicted from their office accommodation due to litigation.

He said: “From the audit carried out on the 2019 Federal Government ConsolidatedFinancial Statement, unsubstantiated balances amounting to N4.973 trillion were observed.

“The N4.973 trillion unsubstantiated balances are above the materiality level of N89.34 billion set for the audit.”

The AuGF explained that “in auditing, materiality means not just a quantified amount but the effect that amount will have in various contexts”.

He added: “During the auditing planning process, the auditor decides what the level of materiality will be, taking into account the entirety of the financial statements to be audited.”

Aghughu said following the discovery, all agencies involved in the infractions were issued queries.

The AuGF informed the Clerk to the National Assembly, Ojo Olatunde Amos, who was represented at the presentation ceremonyby his deputy, Bala Yabani, that annual consolidated financial statements of the Federal Government would be expeditiously audited by his office as soon as they were made available by the Office of the AuGF

Aghughu said: “You will recall that on March 25, 2021, the Audit Report on the Consolidated Financial Statement of the Federal Government for 2018 was submitted to this office to allow for required investigation of queries raised in it by the National Assembly.

“Just five months after, we are here again to make submissions of the 2019 Audit Report.”

The AuGF regretted that his office was not working the way it should due to myriad of factors crippling its operations and giving room for financial infractions among the various MDAs.

“One of such problems is the absence of Federal Audit Service Law, which is a big challenge as far as effective and efficient public sector auditing is concerned.

“This is a law that is needed as basis of fiscal sustainability. The absence of it at the Federal level is very worrisome, going by the fact that some of the states of the federation have the required law in place.

“Another problem incapacitating optimal performance of our mandate, as far as thorough and appropriate auditing of financial statements of the MDAs is concerned, is gross underfunding which is telling much on our efficiency.

“For example, the office is understaffed but there is no money for recruitment.

“Imagine many of our state offices having just two or three workers. Auditing is done by a team not by an individual.

“Accommodation is also part of the problems as our workers in Lagos are about to be evicted from their office due to litigations.

“These are aside the problem of insecurity, seriously affecting our scope of coverage.”

Yabani said the report presented would be submitted to the Clerk for onward presentation to Senate President Ahmad Lawan and House of Representatives Speaker Femi Gbajabiamila as soon as practicable.