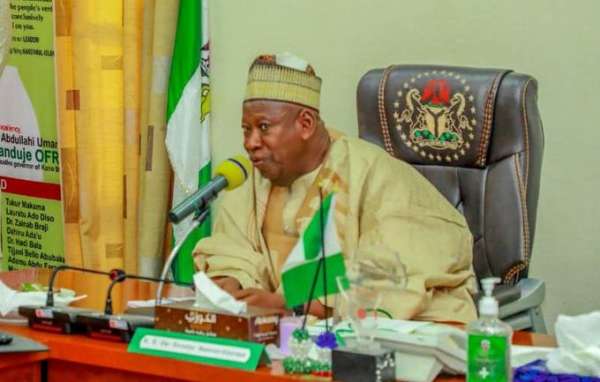 Seven years after the alliance by various political parties to form the ruling All Progressives Congress (APC), Kano state Governor, Dr Abdullahi Umar Ganduje has said the party is yet to be a unified platform.

He described it as a ‘mixture’ of political parties which still struggle to see themselves as one.

Speaking on Monday at a town hall meeting organised by the APC Constitutional Review Committee of North West geopolitical zone held in Kano, Ganduje said the party is yet to graduate to the next level.

Ganduje said, “APC as a party started as a mixture of ACN, ANPP, APGA, PDP, CPC…You see that is a mixture of various elements trying to make a compound.

“But, unfortunately, up till now APC is still a mixture and has not graduated to the next level to become a compound.

“Those who read Chemistry, know the difference between a mixture and a compound. A mixture is something that you can easily separate its particles if you use ions, while in a compound, any part you remove it will still be the same,” the governor added.

Ganduje however said they are still optimistic that the review will look and address the issue so as to have a single and solid APC.

Also speaking, the Chairman of the review committee, North West zone, Dr Tahir Mamman observed that for any system that lasts up to 7-8 years, there is likelihood of having gaps in it, hence, described the meeting as timely.

Mamman also said the meeting which brought together delegates from all the seven North West states will help reconcile and harmonise aggrieved party members, so that APC will continue to retain power up to their 32 years forecast or even beyond.

NAIJA LIVE TV reports that the delegates from all the seven states have presented their contributions with a view to presenting it to the national leadership of the party for implementation.