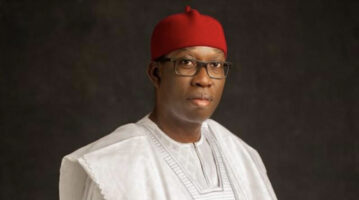 Following the public outcry and backlash against the Delta State Government over the sharp tertiary institutions, Dio Oghale Emeka Rex, the Deputy Coordinator of the National Association of Nigerian Students, NANS Zone B has leaked the personal phone numbers of the Governor of Delta State, His Excellency, Ifeanyi Arthur Okowa.

NAIJA LIVE TV can report that the phone numbers of the State Governor was leaked to the public via the social media pages of several NANS comrades after it was first sighted at the Deputy Coordinator’s page on Thursday morning.

According to him, an ultimatum issued by the apex students union to the State Government to reverse the increased school fees has elapsed hence, students are expected to take out time to meaningfully engage the Governor on phone to press home their demands.

He said students should not be made to bear the brunt of a state that prides itself with the appointment of thousands of political aides without office and work description but are busy receiving huge allowances and salaries monthly.

He noted that the outrageous hike is detrimental to the welfare of Nigerian students as those responsible for it, actually enjoyed free education during their own university days.

He pleaded with the students not to save the number for personal gains but to ask the Governor salient questions on how much he spent to attain his medical career and how students had offended him to warrant such increment at this crucial time.

Nigerian Students please take out time this morning to ask Governor Ifeanyi A. Okowa what’s the offense of the students to him? Ask him how much he paid during his days in medical school.

In a state where by we have thousands of political aides with no office and no work but busy receiving huge allowances and salaries at the detriment of the students, ask him what is the offense of Education to him? Ask him why must students pay for their security, ask him how much is the students bursary and what happened to the free education he met. Just occupy the Ekwueme this morning and ask him to forgive us if we have wronged him that we still want to be a graduate even though there’s no hope for job opportunities.

09099012345 (that is the Governor’s WhatsApp and call number, don’t save it for your personal gains, pour out your pains to him, the pains of your siblings in schools, the pains of your children, just occupy him this morning that he should make pronunciation before this will be the next end SARS).

Meanwhile, NANS Zone B through the office of it’s Deputy Coordinator has concluded plans to embark on a marathon peaceful protest on Tuesday, 22nd February, 2022.

Announcing the date of the protest through a memo made available to our correspondent, the Zone has already notified necessary stakeholders to come along with placards, mattresses, gas coolers and noodles.