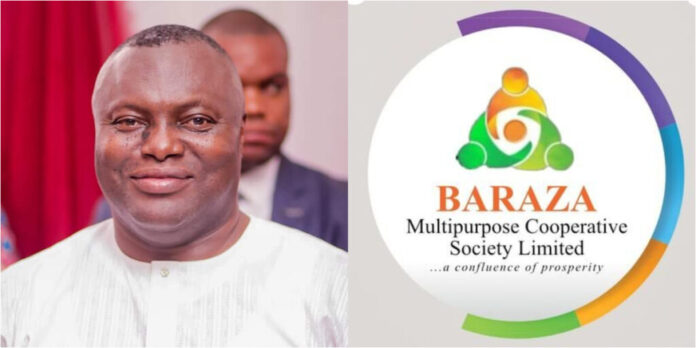 Hundreds of angry investors of Baraza Multipurpose Cooperative Society on Friday, August 6, besieged the headquarters of the troubled organization in Yenagoa, the Bayelsa State capital and carted away various items belonging to the organization.

The members resorted to vandalism and looting as a way of venting their anger following the inability of the management of the cooperative led by Miebi Bribena, to continue their monthly financial obligations to them as promised.

Baraza, was the toast of Bayelsans for over a year with nearly every household in the state having a registered member among the over Forty five thousand members, until March this year when it ran into problems.

In April, Arc. Miebi Bribena, who is the Chief Executive Officer, announced a pause period for payment due to the sudden crisis which he alleged was due to the fraudulent practice of some of his staff and a faulty trading platform of the organizatio.

He had given assurance with every fibre in his body that after the three months, joy will return to the members as they will start smiling again to the bank but sadly few days after the resumption and the payment of few members, Bribena announced that its operations has been halted due to a court order, freezing the Bank accounts of Baraza.

The announcement did not go down well with the members who accused him of masterminding the court order because of his plans to allegedly defraud them, an allegation he denied.

Frustrated by the turn of events, the members had planned to stage a peaceful protest to Government House Yenagoa but the government through the Commissioner for Information, Orientation and Strategy, Hon. Ayibaina Duba, warned them not to, saying they should resolve their issues as Baraza was not an appendage of the government.

Friday’s looting spree became a last resort for the members who had vowed to deal with Bribena and members of his family anytime and anywhere they sight him.

NAIJA LIVE TV further Learnt on Saturday that, Miebi Bribena had allegedly told the Commissioner of Police in Bayelsa State that some angry investors on Friday broke into the Baraza Headquarters and steal the computer set containing all the payment Databases of Baraza Members. That it will be difficult to make payment to members without those database.

The Baraza Boss was allegedly reacting to questions put across to him over the phone at the Police Headquarters in Yenagoa when some investors staged a protest to the Commissioner of Police.

Members and a representative of the disable asked the COE why he failed on his Friday promise to make payment to investors.

Brebena said he never promise anyone of him paying anybody that he pleaded that they should give him more time to reorganize the system for payment based on the court order restricting his bank accounts.

“The computer carrying investors data has been stolen and we no longer have investors details to enable us make payment, we need time to reorganize the system for Payment”. Source in the meeting Quoting the Baraza Boss.