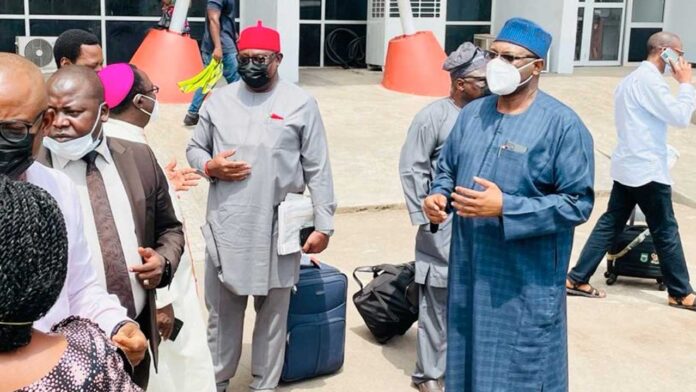 No fewer than 10 governorship candidates for Saturday’s Anambra State governorship election have signed peace agreement to eschew violence, just as they unanimously called for the release of Independent People of Biafra (IPOB) Leader, Mazi Nnamidi Kanu.

The candidates signed the peace pact in response to the appeal by the South-East Council of Traditional Rulers and representatives of Igbo Bishops and Archbishops, who met with them on Monday.

In a joint statement, signed by the candidates, they appealed to their “supporters and other stakeholders to commit fully to these ideals and refrain from any act that may imperil the election.”

He also held a closed-door meeting with members of the Inter-Agency Consultative Committee on Election Security (ICCES), Anambra State chapter, to discuss the security situation with regard to the governorship election holding on Saturday, November 6, 2021.

HOWEVER, Christian groups yesterday organised a prayer session for the success of Saturday’s governorship election in Anambra State, just as they appealed to politicians to allow peace to reign during and after the election.

They also urged the people of the state to vote according to their conscience and not to be persuaded by financial inducement.

The groups that held the prayer session at Ekwulobia township stadium, which include Universal Prayer Fellowship led by Evangelist Iwuchukwu Ezenwafor and the Christian Association of Nigeria (CAN), old Aguata Local Council, led by Apostle (Dr.) Chukwuemeka P. C. Ezekiel said the prayer session became important because, “many people have become genuinely worried and upbeat, considering the prevalent insecurity in the state.”

They said Anambra people deserved fair and credible election and urged the Independent National Electoral Commission (INEC) to ensure a level-playing field for all the candidates.

They said: “The facilitators of the intercessory prayers believe strongly that the Anambra election has something critical to do with the corporate destiny and future of Nigeria and therefore, they made a clarion call to all concerned, including candidates, political parties, INEC and its officials, to put all hands on deck to do the right thing and save the Nigeria from being fatally injured.”

The Christian groups declared that “Anambra State, as the light of the nation is a standard bearer, trail blazer and a typical example of what a composite state of Nigerian Federation should be.”