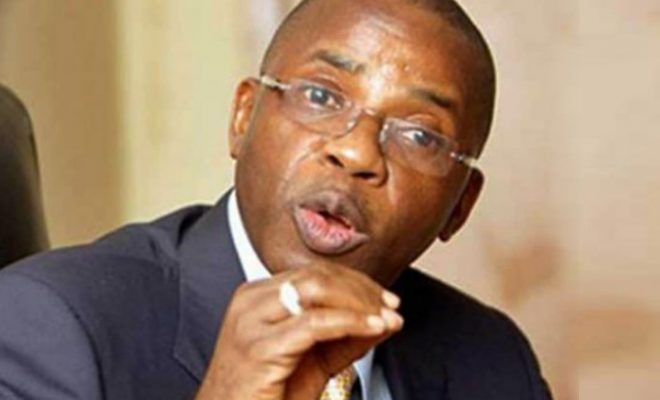 Justice Taiwo Taiwo ordered the Attorney-General of the Federation (AGF) and Minister of Justice, to take over the prosecution of Ohakim from the Inspector-General of Police, at the resumed trial on Monday.

The police had filed criminal charges against Ohakim and Chinedu Okpareke over alleged threat to life and threat to release nude pictures of Amuchienwa.

However, before Ohakim arraignment, the police filed a notice of discountenance of the matter on March 15, same day the AGF informed the court that he was taking over the matter.

According to the charge, Ohakim and Okpareke allegedly threatened to release nude photographs of Amuchienwa if she failed to drop charges of attempted kidnap against them.

On the last adjourned date, Mr Bagudu Sani, a counsel from the minister’s office told the court that the police would no longer prosecute the case as they had filed a notice of discontinuance.

Sani said that the matter, as originally filed by the police, had now been transferred to the office of the attorney-general.

He further told the court that the office of the attorney-general had gone ahead to file an affidavit of compliance.

Counsel to the police Mr Rufus Dimka, opposed the application by the minister, saying that the police had filed a complainant/applicant’s counter affidavit.

Dimka prayed the court to grant the notice of discontinuance and strike out the charge.

Counsel to Ohakim, Mr Emeka Etiaba (SAN), however, opposed the request by the AGF to take over the matter and prayed the court to dismiss the application.

Etiaba said that the content of the affidavit of compliance by the AGF did not in any way affect the consequence of the notice of withdrawal of the charge against his client.

In his ruling, Justice Taiwo held that there was no doubt that the AGF had unfettered powers to take over the prosecution of any case at any point.

He said that the AGF could do that as long as judgment had not been delivered in such a case.

The judge said since the constitution had given the AGF such powers, the court could not give effect to the notice of discountenance filed by the police.

He held that the application by the police to discontinue the matter, lacked merit and upheld the argument by the AGF to take over prosecution of the matter.

He subsequently adjourned the matter until Oct. 21 for arraignment of the former governor and beginning of trial.