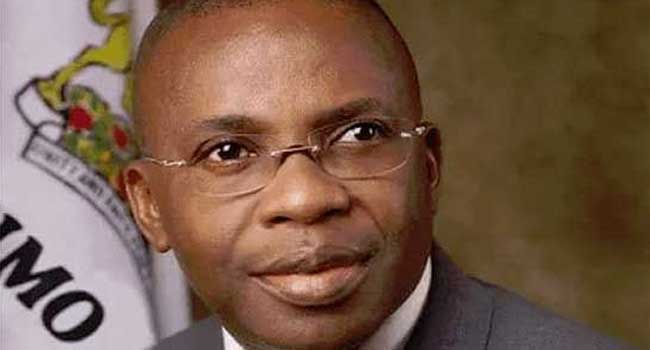 Ohakim and Chinedu Okpaleke are being prosecuted by the Federal Government for allegedly threatening to release nude photographs of an Abuja-based lady, Chinyere Amuchienwa, if she fails to drop charges of attempted kidnap against them.

Following a petition by Chinyere Amuchienwa, the police had filed a criminal charge against Ohakim and Okpaleke, but later discovered that the content of the petition was false and misleading.

Consequently, an effort by the Police to withdraw the charge against the defendants marked FHC/ABJ/CS/287/2020, proved abortive as the Attorney General of the Federation and Minister of Justice applied to the court to take over the matter.

On September 27, Justice Taiwo ruled that the AGF has unfettered power to take over the case.

At a resumed hearing of the matter on Monday, A. K Alilu, an Assistant Director, Public Prosecution of the Federation announced an appearance for the AGF, while Emeka Etiaba SAN appeared for the 1st defendant.

Etiaba apologized to the court that his client was absent because he was in isolation due to the OMICRON COVID-19 variant, having returned from South Africa.

Counsel to Ohakim also apologised for Ohakim’s inability to be in court, citing health reasons.

Ruling, Justice Taiwo held that the COVID-19 is not an issue to play with.

In view of the application of the defendants, the court adjourned to January 17, 2022, for Ohakim and Okpaleke to be arraigned.

In the five-count charge dated November 25, 2020, the police had alleged that Ohakim and Okpareke, knowingly and intentionally transmitted communication through a computer system to harass and bully Amuchienwa, an offence that is punishable under Section 24(1)(a) of the Cybercrime Act 2015.

Some of the charges read, “That you Chinendu Okpareke ‘m’ 49, and Ikedi Ohakim ‘m’ and others now at large on Aug. 13, 2020, within the jurisdiction of this court did conspire among yourselves by knowingly and intentionally sending messages by means of computer system or network in a grossly offensive, pornographic, nude of an indecent obscene and menacing character of one Chinyere Amuchienwa ‘f’ and thereby committed an offence punishable under Section 27 (1)(a) of the Cybercrime Act 2015.

“That you Chinendu Okpareke ‘m’ 49, and Ikedi Ohakim ‘m’ and others now at large on Aug. 13, 2020, within the jurisdiction of this court did conspire among yourselves to cause annoyance and criminal intimidation to one Chinyere Amuchienwa ‘f’ and thereby committed an offence punishable under Section 27 (1)(a) of the Cybercrime Act 2015.”

Unrepentant fraudster gets 28 years in prison after two previous convictions