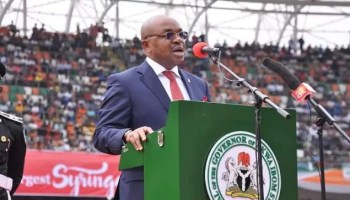 Akwa Ibom government and a South Korean firm, Kumbit Global have signed a joint venture agreement for the establishment of an industrial park in Oruk Anam local government area of the state estimated to cost about $600 million.

The pact which was signed in the office of the secretary to the state Akwa Ibom State Government was witnessed by top government officials including the state attorney general and Commissioner for Justice, Uko Essien Udom, Raphael Bassey, commissioner for housing, Okpolupm Etteh, commissioner for special duties and the surveyor-general of the state, Emem Isang as well as the chairman of the Akwa Ibom investment corporation, Elijah Akpan among others.

In his remarks, Emmanuel Ekuwem, Secretary to the Akwa Ibom State Government said the signing of the agreement would fast track investment and lauded the company for its patience and initiative adding that the state government has shown tremendous resolve in the industrialisation of the state.

Signing the joint venture agreement on behalf of the state, the attorney-general and commissioner for justice, Uko Essien Udom also lauded the state government for creating an enabling environment to attract investment, saying that on completion, it would bring massive economic benefits to the state.

In his remarks Anietie John, the Group Managing Director of the company said it would create over 200,000 jobs for Nigerians adding that the location of the industrial park at Oruk Anam local government was to ensure available land for the park.

John who was accompanied by other board members of the board disclosed that the industrial park will attract third party industries adding that it would create an industrial city of its own.

Among the facilities that would be provided by the park include a fully equipped hospital, agricultural settlement to provide raw materials for the companies and heavy industries as well as a scholarship scheme for the community.

“In the park, the land is one kilometre square and it is quite large, it will house 23 heavy industries and it will produce over 300 product lines which will start with building materials, pharmaceuticals, automobile, household and fast moving consumer goods,’’ he said.

He disclosed that the payment of compensation for the land would commence in a fortnight adding that an acceptable method of payment has been adopted to ensure that the property owners would not have issues with the state government and expressed the hope that when the industrial park would have taken off, thousands of youths in the area would be gainfully engaged.

“We would like to tell Akwa Ibom that this project which we have just signed an agreement with the state government will be beneficial to all. The industrial park needs the support of all as it would create opportunity for all.” (Source: The Southern Examiner)

Polygamy one of my greatest errors in life –...