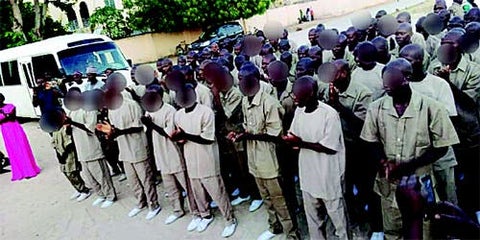 They have been surrendering in droves of late. And their stories of recruitment and surrender have been as outlandish as they are intriguing.

Many of them narrated that the heat from the firepower of the military was becoming unbearable.

They also spoke about the promises that were made that encouraged them to join terrorist groups only to find at the end that they were empty promises.

Their tales were laden with regrets.

These were former fighters of the terrorist group, Boko Haram, and its Islamic State West Africa Province (ISWAP) affiliates operating in the North East of Nigeria and the Lake Chad Basin bordering Nigeria with Chad and Niger.

The former fighters narrated how military offensive on their former hideouts and camps had been so much so that divisions not only broke out among their erstwhile commanders, many of them were also eager to surrender while their families, especially women and children whom they had all along used as human shields in Sambisa forest and other hideouts and camps, were now being dumped and abandoned, to enable them escape.

They cited the dumping of 33 women and 39 children, totalling 72, at Ngala town, near Sambisa forest as an example.

The military corroborated their story, citing the killing of late 19 Amir’s or commanders of the BHT/ISWAP terrorist groups by troops, compared to a total of 18 Amir’s killed between January and March 2020.

Indeed, the number of ISWAP fighters surrendering has recently, according to the military, increased by the day with 11 of them throwing in the towel on May 11, 2020 in Adamawa State.

Meanwhile, 603 surrendered fighters, who claimed to have repented, screened and profiled, are undergoing de-radicalization under Operation Safe Corridor and are due to pass out in June 2020 before being reintegrated into society.

Already, 280 surrendered repentant terrorists have successfully undergone the programme and have been reintegrated into the society.

25 of this number are from Niger and have been repatriated to their country.

Speaking on why they decided to surrender, many of the surrendered fighters told Sunday Vanguard that the heat from the firepower of the Nigerian military was becoming unbearable.

They cited constant air force bombardments in day time and in the night.

Also of note was the artillery bombs fired from afar by ground troops to neutralize Boko Haram fighters’ tactics of ambush and catching troops unawares.

Some of the former fighters confessed that they had seen the deceit of their commanders who induced them with promises of wives and money.

“But when we joined, we found out there were no wives and money was not forthcoming. Rather there were die-hard female BHT members who provided sex and could not be married. So after returning from any expedition, you could have sex at random with any woman”, one of them said.

“Also, whenever the BHT commanders sent us, as foot soldiers, to go and attack villages or traders in markets and loot money or other logistics needs’ and we returned, the commanders would corner everything and give us only paltry cash from what we had brought while taking the large chunk.

“To appease us, they would give us hard drugs to make us high”

Military officials said about 396 BHT/ISWAP fighters had been killed and hundreds escaped with various degrees of gunshot wounds over the past five weeks.

Besides, the officials said there were several other fighters, including key leaders, believed to have been killed by air bombardments but whose remains could not be located.

There were also claims of Boko Haram’s logistics installations and networks being destroyed while 16 of the terrorist group’s informants and logistics suppliers were arrested.

To drive home the extent of the military offensive, the air component (NAF), Sunday Vanguard was made to understand, has flown 1,700 hours of combat in the last four months in the North East and the Lake Chad Basin areas.

“It has attacked and thrown munitions (bombed) 33 targets with precision”, one official said.

“This was conducted through subsidiary independent operations including Operations Rattle Snake 2 & 3 and Operation Decisive Edge, while also providing support for the Multi-National Joint Task Force (MNJTF) and allied partners in order to decimate/dislocate and deny the BHTs freedom of action”.

On its part, the MNJTF alerted of an imminent BHT/ISWAP recruitment drive, saying the beleaguered leadership of the terrorist group, particularly in the Lake Chad area, had launched an aggressive indoctrination and recruitment drive for new converts.

Saying offensive operations and internal squabbles for money and power had depleted BHT/ISWAP, Antigha said, “The terrorist organization therefore plans to use the envisaged recruitment to cover the severe manpower shortage facing them.

“Consequently, the Task Force urges youths in the North Eastern states of Nigeria, Lake Province of Chad, Diffa Region of Niger and Extreme North Region of Cameroon to be vigilant and shun all promises of opportunities for quick money and misguided teachings about jihad.

“The Multinational Joint Task Force also wishes to draw the attention of the public in the affected areas and environs to the sinister plan of BHT/ISWAP and appeals to Imams, community leaders and parents to sensitize their congregations and family members and also watch the activities of their youths and children”.

Sunday Vanguard learnt that the lack of 100 per cent sincerity in the fight against BHT/ISWAP by Chad, Niger and Cameroon, before now, was responsible for the failure to defeat the group because the countries saw it as a Nigerian problem.

But the attack on Chadian soldiers and killing of some of them changed the narrative.

On March 23, 2020, BHT/ISWAP had carried out a devastating attack on Chadian troops deployed on the Boma peninsula – Lac Province, bordering Niger and Nigeria and inflicted the largest single casualty on them.

92 soldiers were killed in the incident while 47 escaped.

After eight days, the Chadian armed forces declared mission accomplished, saying they had cleared the Lac Islands of all jihadists, killing about 1,000 of them, while a few others narrowly escaped to Niger and Nigeria borders.

On its side, Chadian military lost 52 soldiers while 196 were wounded.

The Chadian forces planned ‘Operation Boma Wrath’ as a retaliatory operation but got logistics and tactical collaboration from Nigeria and Niger forces under Sector 3 and Sector 4 of the MNJTF to achieve battlefield success.

How We Scouted For Pregnant Teenagers, Made Millions Selling...