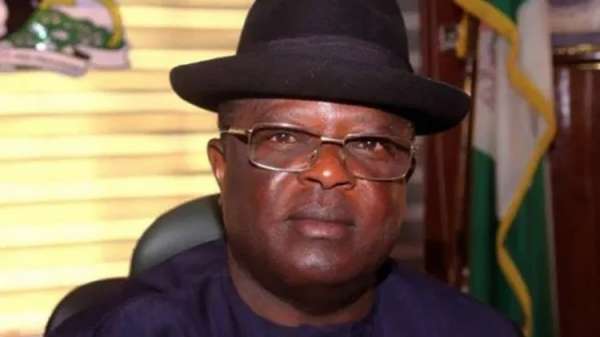 As next month’s gubernatorial primary of the ruling All Progressives Congress in Ebonyi State approaches, Governor David Umahi has thrown his weight behind the governorship ambition of the embattled Speaker of the State House of Assembly, Francis Nwifuru, as his preferred successor come 2023.

This is coming on the heels of reported opposition by stakeholders of the party from Izzi, Ebonyi, and Abakaliki Local Government Areas of the state.

The Association of Ebonyi State Indigenes in Diaspora led by Amb. Paschal Oluchukwu, had, on Friday, also kicked against the purported endorsement of the embattled speaker by a group known as Ezza Ezekuna youths and traditional rulers of the Izzi Clan.

Umahi gave the endorsement, on Saturday, at Okposi, in the Ohaozara Local Government Area of the state, during the burial ceremony of late Chief Dandy Omoke, a former Chairman of the council.

Umahi, while introducing Nwifuru at the occasion, described him as the next Governor of Ebonyi State.

Nwifuru, who has served as speaker of Ebonyi State House of Assembly since 2015, is in his third tenure in the House.

He was first elected into the Assembly in 2011 on the platform of the Peoples Democratic Party.

He was subsequently re-elected under the same platform in 2015 and in 2019, before he defected to the All Progressives Congress in 2020, alongside Governor Umahi and 15 other House members.

Commissioner for Information, in the state, Uchenna Orji, confirmed the endorsement, on Saturday.

While reacting to an inquiry by a national daily, the commissioner said Nwifuru possessed the necessary requirements to succeed Umahi, come 2023.

He said, “Yes, the endorsement is true. Nwifuru is our candidate for the 2023 governorship election in Ebonyi State.”

According to PUNCH, the governors have openly rallied stakeholders’ support for their preferred successors, while some are said to be making silent moves, including subtle persuasion and coercion, to have their way.

In Ebonyi State, the APC stakeholders of the Izzi clan, comprising Ebonyi, Abakaliki, and Izzi local government areas, disagreed over who would succeed Dave Umahi in 2023. They expressed their opposition to the rumoured support of the governor for the Speaker of the state House of Assembly, Francis Nwifuru.

Also, the Association of Ebonyi State Indigenes in Diaspora, has decried the purported spates of ‘induced’ endorsements of the embattled speaker by faceless groups, some apolitical actors such as traditional rulers.

The President-General of the group, Amb. Paschal Oluchukwu, stated this in a statement, on Friday, urging the public to ignore social media reports that an Ezza youths group ‘adopted’ the embattled speaker, as its choice for the 2023 governorship election in the state.

According to him, “The news making round various Social media platforms that the embattled Speaker of the Ebonyi State House of Assembly, Rt. Hon. Ogbonnaya Nwifuru was endorsed as the choice of Ezza nation for the 2023 Governorship election merely exposes the level of desperation and ignorance on the part of both the alleged ‘endorsers’ and the endorsee.

“Therefore, the report that some ‘Ezza-Ezekuna youths led by Hon. Victor Nwite, one of his aides, Haggai nwokpor, Prince Chika Igboke, Okwudili Sampson Nworie, Nweke Ikechukwu, and Joshua Nwafor among others endorsed the sacked Izzi-born Speaker of Ebonyi State House of Assembly during a recent Courtesy visit should be utterly disregarded and ignored by every well-intentioned Ezza sons and daughters.”

“The fact remains that the Ezza nation at home and in the diaspora are more determined and focused on ensuring that it produces the next Governor of Ebonyi State in 2023 than some treacherous political foes whose stomachs have remained their gods can ever imagine.”

According to the group,  Umahi was working in connivance with ‘these’ faceless groups and non-state actors, to foist his selfish agenda on the state, ahead of 2023.

Recall that Umahi had penultimate week convened a meeting of the stakeholders with the aim of harmonising and choosing two prospective candidates on the platform of the party for the governorship as well as for other positions.

APC primary: I did not step down for Ahmed Lawan – Dave Umahi

‘I will conclude my tenure in 2023,’ – Umahi reacts to Appeal Court judgment

Defection: “No legal action can be taken against a sitting Governor and his deputy – Appeal Court Clears Umahi, Deputy

Wike And I Are Different, One Serves God And The Other Alcohol – Umahi