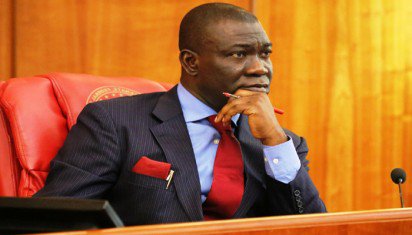 Ekweremadu accused the All Progressives Congress, APC, of persecuting PDP leaders and leaders of the National Assembly ahead of the 2019 general elections in the country.

He said this at the Akure Airport on his way to a political rally in Ekiti State.

Ekweremadu said: “The leaders, including all of us, are facing persecutions, smear campaign, and threat.

“I want to tell you that this is our darkest hour in our country and the darkest part of the night is when it is almost dawn. Let everybody exercise patience, we are almost at the daylight.

“We want to appeal to everybody that we are democratic and we are going to win in a democratic way. We eschew bitterness; we eschew any kind of violence so that our winning will be in PDP way which is peaceful.

“So, the success of PDP next year will start in Ekiti by July. We are going to ensure we win in Ekiti state.

“We thank the Southwest because they are leading this success, after that of Ekiti, we will win Osun State and after Osun, by 2019, we will be winning all the way.

“We thank you for standing by us. We understand that one of our leaders, who was given an opportunity to be a minister of the Federal Republic of Nigeria, we gave an opportunity to be the governor of this state and made him chairman of PDP Governor’s Forum, but today out of threat, he left us.

“Those who are unfaithful will never last long I want to assure you that.

“Like smoke, he has left us and now we can see clearly. We can see those who are gentlemen and those we can depend on to salvage our country.

“I want to assure those of you that are still with us that you will never regret your staying back in the party.”

Earlier, the PDP National Vice Chairman, South West, Mr. Olafeso said that the failure of the ruling party had cleared the way for the opposition to win the 2019 presidential election.