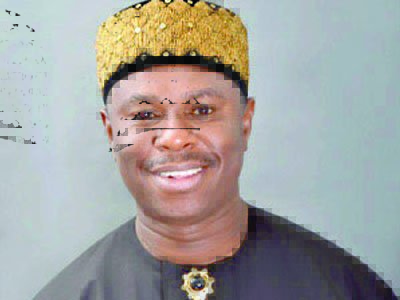 The Director-General of the Nigerian Maritime Administration and Safety Agency (NIMASA), Dr. Dakuku Peterside, has stated that ahead of the 2019 governorship race in Rivers State, he has not resigned as the helmsman of NIMASA.

Peterside, the 2015 governorship candidate of the All Progressives Congress (APC) in Rivers, described as childish, the insinuations, especially on social media, that he resigned his appointment to pursue a political interest, with the leader of the party in the state and South South zone, Rotimi Amaechi, who is also the Minister for Transportation, rejecting his rumoured resignation.

The NIMASA chief, yesterday in an online statement by his media team, stated that disillusioned politicians and their hatchet men were behind the rumour, which he said was to give life to a lie that had no bearing and foundation.

He stressed that he would have simply ignored the talebearers, but for many calls from concerned Rivers people, who expressed worry over the development and who were genuinely concerned about the future of the state.

Peterside, an ex-member of the House of Representatives, reiterated that he had repeatedly told Rivers people that he would make his decision known at the right time, concerning his political interest and would follow the due process, if the need arises.

He said: “Let me emphatically state that at no point did I resign and as such, there was no rejection of my resignation from any quarters. I have repeatedly stated that whenever I am ready to make my decision known, I will tell Rivers people and it would not be hidden.

“I am aware that some jittery politicians, who have jeopardised their political relevance, may have resorted to blackmail and outright lies to give their waning members hope. This is not unusual, as they will become more desperate in the days ahead.”

The former Rivers Commissioner for Works also urged Rivers people and friends of the state to ignore the unfounded rumour, maintaining that there was no iota of truth in it, while remaining focused on how to rebuild Rivers State, allegedly destroyed by the “evil” regime of Governor Nyesom Wike of the Peoples Democratic Party (PDP).

He declared that members of the APC in Rivers remained unshaken in their resolve to sack Wike in 2019 for alleged poor performance, while members of the main opposition party would not be hindered by the shenanigans of fifth columnists.

Peterside, who is also the deputy leader of APC in Rivers, stressed that all members of the party, under the leadership of Amaechi, would support whoever emerged as the governorship candidate of the party, towards the end of this year, for the 2019 poll.

He said: “Every member of APC in Rivers State subscribes to the leadership of Chibuike Rotimi Amaechi. The party at the appropriate time will give guidelines on its governorship primary election and all will support whoever wins.
“There is no need crying wolf where there is none. Only those who have skeletons in their cupboards are panicking.”

The NIMASA chief also admonished all Nigerians to continue to support the performing and focused administration of President Muhammadu Buhari.