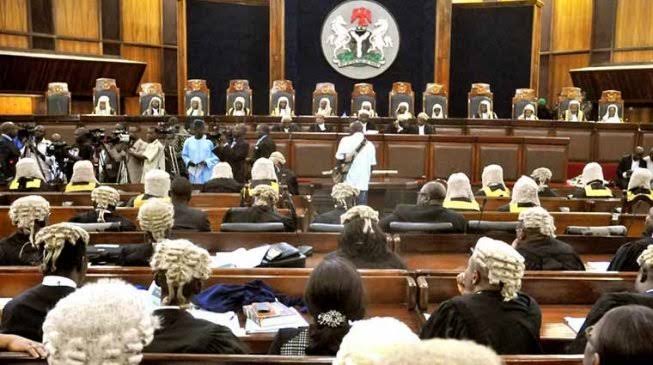 NIGERIANS must with one voice put this critical question to the seven-member Supreme Court panel of judges that sacked Governor Emeka Ihedioha of Imo State and planted Senator Hope Uzodinma as his replacement: Distinguished as you all are, would you have dared to pronounce this same perversity if other than the All Progressives Congress, APC, is currently in control of the Federal Government of Nigeria?

The controversial Supreme Court verdict was read by Justice Kudirat Motonmori Olatokunbo Kekere-Ekun. Mrs Kekere-Ekun was born in 1958. She earned her first Law degree from the University of Lagos, and the second from the London School of Economics and Political Science, not from backyard or quota colleges that routinely grant admissions to laggards confirmed incapable of passing basic School Certificate subjects like English and Mathematics. Called to the Bar in 1981, she was appointed to the Supreme Court 32 years later.

Notable lawyers hailed her appointment to the apex court, two of whose informed opinions are here: “I have read a few of her judgments; she is very sound in law. In other words, she suppresses technicality and allows substance to prevail. She has that equitable spirit of trying to do justice,” said Professor Itse Sagay, SAN. Said Mr. Tani Molajo, SAN: “This jurist has risen quickly through our judicial system by sheer dint of diligence, scholarship and uprightness. I dare say that I speak the mind of the entire profession when I say that the transfer of all those virtues to our highest court in the person of Justice Kekere-Ekun is cause for celebration.”

Equity. Diligence. Scholarship. Uprightness. These are some of the intensifiers used in support of Justice Kekere-Ekun’s suitability to sit in judgement over the affairs of her fellow human beings. But, if asked by her son or daughter, would she be able to pinpoint any of these wholesome qualities in the judgement she read, which bizarrely manufactured 103,257 votes in excess of the number of voters registered by the Independent National Electoral Commission, INEC, for last year’s Imo State governorship election? Critical point: None of the parties to the election petition disputed either of INEC’s total number of registered voters and total number of accredited voters for the governorship contest, from the Election Tribunal right up to the Supreme Court.

Take the Honourable Justice Ngwuta who has been a Supreme Court Justice since 2011. He was, like a handful of other Justices of the apex court, arrested in October 2016, by operatives of the Department of State Service, on allegations of bribery and corruption. Arraigned in court on 13 counts of money laundering by the office of the Attorney General of the Federation, he was, like his peers, discharged and acquitted because lawyers successfully argued the incompetence of all the charges by standing on the key point that cases against superior court Judges – from the High Courts to the Supreme Court – should first be treated by the National Judiciary Council, NJC.

How would Justice Ngwuta respond if a sister or brother of his asked why the Supreme Court validated election result disavowed by three legally constituted bodies – the INEC, the Election Tribunal and the Court of Appeal, but flagrantly submitted to it by a Police officer legally incompetent to do so? We are here talking of results which, according to the processes filed by lawyers to Governor Ihedioha who is seeking a review of the Supreme Court judgement, were computed by Senator Uzodinma. “The fraudulent nature of the additional votes was demonstrated by the fact that the total votes cast as shown in the first appellant/respondent’s computation was more than the total number of voters accredited for the election…,” argues Ihedioha.

How would Justice Amina Augie react to the following distorted statistics from the Uzodinma results?

In the 388 units whose results were computed by Senator Uzodinma, he won an incredible 95 percent of the votes. But, in contradistinction, he won a miserly 12 percent of the votes cast in the 2883 polling units on which INEC result was based.
In the 388 units of Uzodinma’s votes computation, no results were entered for the 68 other political parties that fielded candidates for the governorship election. Damningly, there were no fields in Uzodinma’s dubious result sheets even for the inputting of scores of the other political parties. My flabber is comprehensively gasted.

Senator Sola Akinyede is a constitutional lawyer. After forensically dissecting the text of the Supreme Court judgment, he published an article entitled Supreme Court and Imo: A Matter of Courage on the back page of ThisDay of January 27, 2020. In it, he called for a review of the Supreme Court decision. His argument: “The decision of the Supreme Court in Imo goes beyond Ihedioha. It goes beyond Imo. It goes beyond PDP or APC. It goes to the heart and foundation of the acceptability, credibility not just of the Supreme Court, but of our justice system and our democracy. Amid its conflicts and contradictions, if this decision is allowed to stand, it will set a precedent, and under the doctrine of stare decisis, the decision must be replicated in the different Election Petitions Tribunals and Divisions of the Court of Appeal across the country with each one picking any that fits its fancy. With a loss of confidence in the justice system and disparate decisions by the various courts and tribunals, the consequences could be grave, leading to a breakdown of law and order in different parts of the country in 2023/2024.

“By changing the time-honoured legal principles and accepting the results from a police officer who was not at the 388 polling units, the Supreme Court may not appreciate the serious implications of their decision. But as a politician, I know that without knowing it, they have just given a licence to politicians to manufacture results from their bedrooms and call an army officer, Civil Defence officer or anyone to present the results in court.”

Nigeria is retrogressing, rather than progressing. In the years immediately following the Wind of Independence that blew across Africa, Nigeria played a leading role in supplying many newly independent Eastern and Southern African countries with judges. Dr. Udo Udoma was the Chief Justice of Uganda in the 1960s, for instance. Justice Michael Onyiuke was a judge in Tanzania. Justice Emmanuel Ayoola was a Judge of the Appeals Chamber of the Special Court for Sierra Leone. Nigeria’s renown as a centre of jurisprudential excellence was global. Justices Teslim Elias, Charles Dadi Onyeama, Bola Ajibola, and Clement Akpamgbo were judges of the World Court in the Hague.

But witness what is happening today. The Kenyan Supreme Court on September 1, 2017 nullified the re-election of President Uhuru Kenyatta after finding that the presidential ballot held a month earlier were “tainted by irregularities”. Only on February 3, 2020, a Malawi constitutional court nullified last May’s election of President Peter Mutharika on the grounds of “massive irregularities”.

Kenya gained Independence in 1963; Malawi gained Independence a year later. But, in Nigeria that became Independent in 1960, the Supreme Court has foisted a Governor on Imo State on the strength of fabricated results that are tainted by massive inconsistencies, illogicalities and irregularities. It is welcome news that Governor Ihedioha promptly filed processes for the Supreme Court decision that unjustly ousted him from office to be reviewed. People, however learned they may be, are wrong who claim that all Supreme Court judgements are set in granite.

Panic in UNIBEN over conflicting results of suspected COVID-19 cases

Education SAINT MIENPAMO - April 5, 2020 - 8:04 am
0
Conflicting test results of two patients suspected to be infected with the Coronavirus Disease (COVID-19) have led to confusion at the University...

Drama as Groom walks out on bride at church wedding …says he planned to...

Health News News Agency - April 5, 2020 - 7:11 am
0
With over 1 million people globally infected, the world has begun facing the reality of the novel coronavirus which causes the disease,...

Corpses of persons who tested positive for ...

“You helped President Buhari, APC to win elections in...

Panic in UNIBEN over conflicting results of suspected COVID-19 cases

Drama as Groom walks out on bride at church wedding …says...