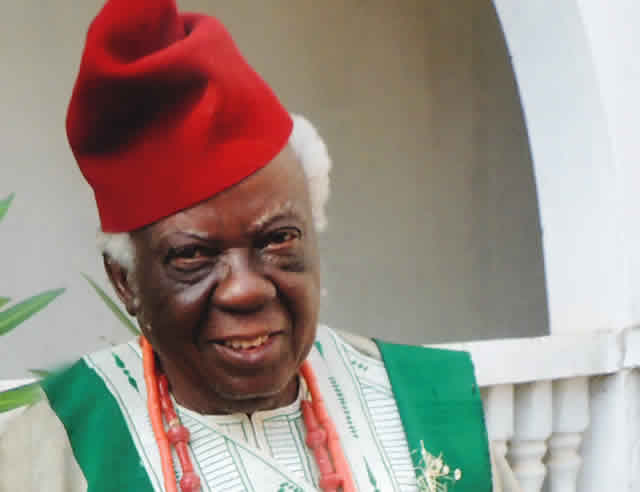 Tell us about yourself.

I was born in Egbe, a town in Kogi State. Egbe is the first town to sight when one is entering Kogi State from Ilorin. I was born on February 1, 1934. My father was Alabi Simoyan while my mother was Olatilewa Simoyan. I am the Basorun of Egbe town. I was a columnist for Sunday Times of the Daily Times family for many years. I am also the author of a history book, entitled, ‘Oibo Egbe’. We call white people ‘oibo’ in Egbe. It is a chronicle of the life and times of Rev. Thomas Titcombe, one of the earliest missionaries who brought Christianity to our town.

Tell us about your educational background.

I attended the Central School and Titcombe College, all in Egbe, Kogi State. Thereafter, I attended the Nigerian College of Arts, Science and Technology, Zaria. I also attended the Nigerian College of Technology and the then University of Ife (now Obafemi Awolowo University). I went for a diplomacy course at the Université de Montpellier, France, and the American University, Washington DC. I was initially admitted to study Medicine under a Federal Government scholarship but I changed my course from medicine to public administration.

How was your childhood?

My mother was my father’s youngest wife. We didn’t live together with the other wives. I was not quite familiar with my father’s other children but I could recognise them.

At the age of four or five, I began my life on the farm, which was not too far from the main settlement. At a point, I knew I needed to go to school so I told my father I would like to go to school. At that time, he was too old to fend for me.

I decided to sponsor myself through school so as not to belabour my father. I aligned with some missionaries in Egbe. I became a mission boy in 1949. I worked for the missionaries and they became my guardian.

When I got to Standard Five of those days, I took an entrance examination to college and I was fortunate to be admitted.

Which period of Nigeria’s early history is significant to your life story?

I visited Lagos on October 1, 1960, and I witnessed the independence celebration; the change of guards and the lowering of the flags and the raising of our country’s new flag.

Why did you change your course?

I discovered that it would take a long to complete my studies in order to become a medical doctor. I initially preferred to study Medicine because my grandfather was an herbalist. I was discouraged at some point so I had to opt out of the medical programme. I was on a scholarship but I was lucky to change my course to Public Administration after a long argument with the administration officer at the scholarship board. The secretary to the scholarship board wanted to know why I was trying to change from Medicine to Public Administration which was not considered as important as Medicine.

He was trying to prevail on me to continue studying Medicine but I said no. He said, “What is wrong with you?” I told him there was nothing wrong with me. He took my file out, read it and shook his head.

He said nobody would give me a scholarship initially to study Public Administration but that I should go and make up my mind.

When did you eventually decide to study Public Administration?

When I left his office to go home, I saw a friend with a book on economics. The book is, Elements of Economics. He gave me to read and I read chapter one only to discover that it is an interesting subject. I said, “So, there is a subject like this? I went back to the secretary of the scholarship board and told him that I had made up my mind to study Public Administration.

I studied Public Administration at the then University of Ife. The university was then at Ibadan. After my graduation, I joined the civil service in Kaduna.

How did you become a diplomat?

In 1963, the Federal Civil Service did a mass transfer of civil servants to other parts of the country. We were given the opportunity to choose between the home service and Foreign Service. I opted for Foreign Service because I was interested in seeing the world and represent Nigeria.

I went to the Ministry of External Affairs then and they sponsored me to proceed on diplomatic training at the Université de Montpellier, France, where I studied French language, international relations and diplomatic practice from 1963 to 1964.

We were nine that were sent abroad for training. I reported back to Lagos where I spent three months before I was deployed in Washington DC, where I spent four years as second secretary, Political Affairs, Nigeria Embassy. From 1971 to 1974, I was the Charge d’Affaires of the Federal Republic of Nigeria to the Republic of Dahomey (now Benin).

What were your remarkable memories representing Nigeria in other parts of the world?

I made sure I got married before I left Nigeria. My wife and I travelled to France together. She also studied French at the same university. Life in France, where I was first deployed in, was not too difficult but it was very complicated because I had to learn the language.

The language was a major challenge. I felt a bit at home because there were other students from West Africa who came to France to study. Many of them came from the then Republic of Dahomey, now the Republic of Benin. They are Yoruba.

When they knew I was from Nigeria, they began to speak Yoruba to me. Their Yoruba was a bit different only in assent. When I heard them say words like, ‘Walahi, oro yen o ri bee, arakunri,’ I laughed and felt at home.

Another challenge was the culture shock and racism. We were young diplomats; so, we knew how to deal with awkward situations. One of the greatest lessons is that you learn about other people. I learnt how to collaborate and cooperate.

How did you meet your wife?

I got married when I was 30 because I studied at a much older age. I should have got married before 30. I had to marry because I was going abroad. I had to settle down. I met my wife long ago. Her elder sibling was my friend. Her grandfather was my father’s friend. She is more or less in the same family circle. She hails from Egbe too. I think it’s the best thing to marry from one’s hometown. If you marry from your town, the problems of marriage are reduced by 50 per cent. This is because you get to understand each other better. Marriage is a problematic situation because two people from different backgrounds are coming together to form a home. The two of you would have to decide to be friends but I took my wife as my sister. She passed on in 2008 and it has been hard living without her.

What was the most challenging period of your life?

That was when I had to sponsor myself to go to primary and secondary schools. As a young boy, it was not quite easy. I was very brilliant in school. I liked studying and that has kept me till today. These days as an old man, I write every day.

Another memorable aspect of life was a near-death experience when I represented Nigeria abroad.

People have a wrong perception of Foreign Service. They think it’s an easy job and that diplomats only go to other countries to enjoy life. Foreign Service is a life of sacrifice because you are cut off from your family.

Just as I was about completing my assignment in Austria, there was this horrible experience when terrorists attacked the OPEC headquarters in Austria.

On December 21, 1975, some militants attacked the semi-annual meeting of OPEC leaders in Vienna, Austria. I was at the meeting alongside Nigeria’s Minister of Petroleum Resources, Dr. Tonjo Akobo. Dr. Akobo asked me to get him something.

When I was going out of the meeting, I asked two other Nigerians to go with me. One of them was engineer Okanlawon from Ogbomoso and another person in the Ministry of Petroleum. When we were going out, we met some people with a bag and that was unusual. We didn’t know that they were terrorists.

I quickly used the opportunity to see my family while the other two Nigerians went to get some things at their hotels.

There were police, army officers and it was cordoned off. They announced that we should go to the office of the Austrian prime minister and we discovered that the ministers had been arrested by the terrorist. Three people were reportedly killed in the attack.

The lines were opened for us to call our countries so I called. It was a Sunday but couldn’t get through to anybody. I asked Okanlawon whether he had anybody’s telephone and he said he had that of Gen. Olusegun Obasanjo. I called Gen. Obasanjo and spoke to him in Yoruba about the situation.

I told him that they had arrested all the ministers, including Dr. Akobo. It was a harrowing experience. God saved my life.

What is the secret of your good health?

Nobody can predict how long he or she would live. Longevity of life is a gift from God. My doctor told me that my body is younger than my age. I have never taken alcohol. I don’t drink alcohol even despite my diplomatic experience. People believe that most diplomats drink but it is not true. My mates used to drink in my secondary school days but I never joined them.

How fulfilled are you at 83?

I thank God for everything. Despite the fact that my wife is no more, I try to live a happy life.

EndSARS: Be at alert, deal decisively with any attack in your duty locations –...

Looting: We Hid Palliatives Ahead Of Second Wave Of COVID-19, Nigerian Governors Say

‘I thought they were armed robbers’ — Ebuka recounts...

#EndSARS: President Buhari will take a major action in...

EndSARS: Be at alert, deal decisively with any attack in your...

Looting: We Hid Palliatives Ahead Of Second Wave Of COVID-19, Nigerian...