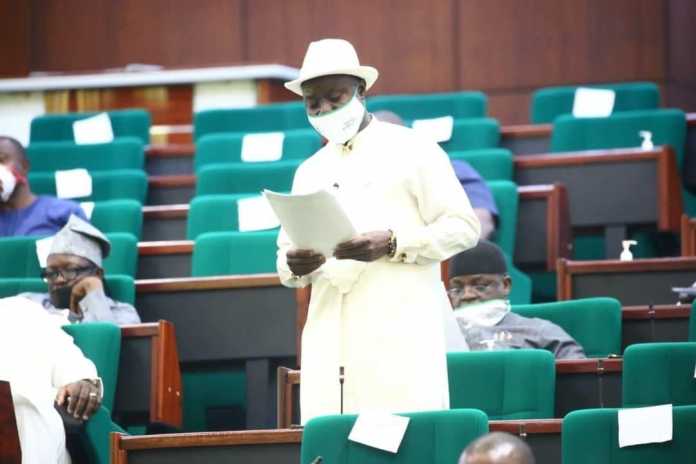 The motion- which was described urgent and important in a Copy of the print made accessible to NAIJA LIVE TV has been described as very necessary, following series of military invasion the state has received in recent time.

This decisive step was taken as a necessary caution to curtail the illegally unceasing invasion of the region by military men.

The print, as received by NAIJA LIVE TV, signed by Hon. Preye Influence Goodluck Oseke, the member representing Southern Ijaw Federal Constituency and Deputy Chairman, House Committe on Petroleum Resources, addressed it to the Speaker house of Representatives and the Federal House of Assembly, reads:

NOTES that Section217 of the 1999 Constitution of the Federal Republic of Nigeria (as amended) creates the Nigerian Armed Forces for the purpose of:-

(a) defending Nigeria from external aggression;

(b)maintaining its territorial integrity and securing its borders from violation on land, sea, or air;

(c)suppress insurrection and act in aid of civil authorities to restore order when called upon
to do so by the President but subject to such conditions as maybe prescribed by an Act of
the National Assembly and other internationally prescribed rules of civil engagement.

(d)perform such other functions as maybe prescribed by an act of the National. Assembly.

ALSO NOTES that as a result of the problem of Pipeline vandalism in the Niger Delta region,
the late President Umaru Yar’adua Administration commissioned a Joint Military Task Force known as Operation Polo Shield(now Operation Delta Save) which was stationed to protect oil installations, personnel and curb the menace of pipeline vandalism in the region. This has continued in dealing with militancy, kidnapping, sea piracy and other general insecurity is issues as they occur.

FURTHER NOTES, that recently there was a military operation near Foropa in Southern Ijaw Federal constituency, Bayelsa State.

This has further heightened the fear of the people of the community with the information that the military will return to burn down the community as has been done to several communities in Bayelsa State and the Niger Delta region in general some of such communities being Odi, Ezetu, Letugbene, Agge, Bilabiri1 and 2, Azagbene communities,
etc,etc.

INFORMED, that the invasion and destruction of a community is now the pattern adopted by
the Nigerian Military in Bayelsa State when ever. indigenes from these Communities are
suspected to have carried out any act against oil installations. It puts the innocent and law-
abiding citizens of the area in double jeopardy as they suffer attacks from the same unguided
elements who rob and terrorize people and also reprisal attacks from our tax-funded military. This is devastating enough for people who are citizens of this country.

CONVINCED, that a globally respected Armed Force such as the Nigerian Military. cannot
afford to exhibit such uncivilized acts even in the face of provocative acts of citizens who they are supposed to protect. Rather, the Military should engage their very efficient intelligence agencies to conduct thorough investigation and apply surgical precision raids to bring these miscreants to justice as we are fully in support of such.

WORRIED That if this pattern now adopted by the Nigerian Military in Bayelsa State is not
immediately stopped, the map and population. of the state will be greatly reduced in the near
future, if not wiped out.

1.condemn in strong terms the recurring attacks on oil & gas installations and facilities

2.Also condemn the continuous sea piracy/kidnapping activities of youths in the state, and
resorting to using communities as hideouts, thereby jeopardizing the peace in the
communities;

3.Call on community leaders,to at all times prevail on their youths to explore lawful means
of pursuing their demands; as. well as desist from acts tantamount to aiding and abetting
criminal activities in their domain;

5.urge the Chief of Defence Staff to order the immediate halt and further invasion and
destruction of communities in Bayelsa State in whatever guise; and

6.mandate the House Committee on Defense to investigate these actions by the Military
and report back to the House within six weeks for further legislative action.

Will this unmerited attacks, perpetrated against Bayelsans be truly curtailed with this motion? NAIJA LIVE TV promises to keep you in the loop.

STATE OF THE NATION: The Leadership Question – By:...

Face of a thief: Prof. Pondei swims in pond...