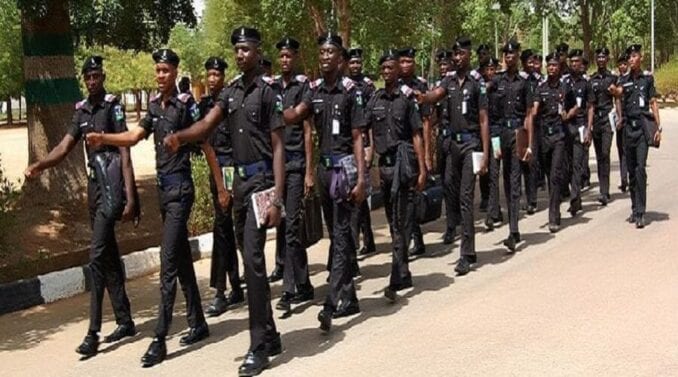 A total number of 106 Bayelsa indigenes have been recruited and trained at the Police Training School, Nora-Tai in Rivers State by the State Police Command into the pilot scheme of community policing.

The state Commissioner of Police, Mr Mike Okoli, made this known yesterday during the community policing sensitization/Awareness campaign in the state.

Okoli pointed out that the newly recruited community police personnel will work within the area of posting through gathering and sharing of intelligence to divisional heads and Area Commanders.

The Chairman of Bayelsa Traditional Rulers Council, King Alfred Diette Spiff commended the new initiative of the Inspector-General of Police, describing it as a welcome development.

“The synergy between police and the people will ensure proper security. We commend the Police IG for bringing bank security to the people,” he said.

Also speaking, a retired Deputy Inspector-General of Police, Sodonye Wakama, explained that the decision by the police hierarchy to adopt community policing was based on the fall out from the #EndSARS protest and the need to bridge the gap between the people and the Nigerian Police.

Wakama also noted that the new community policing is backed by legislation and will not go away after the tenure of the Inspector-General of Police.

In his speech, the Bayelsa State Governor, Douye Diri, represented by the Secretary to the State Government (SSG), Mr Konbowei Benson, noted that the state government had always taken it as a point of duty to support the police in their act of providing adequate security for all Bayelsans.

He added that the present administration would stop at nothing in ensuring that all necessary support is given to the police and other security agencies in the state to ease their operations.

The governor urged both the police and members of the public to be friendly to each other.

While urging the Nigerian Police to be civil in the discharge of their duties, he admonished those being secured to show maximum respect and cooperation so as to ensure smooth partnership.

FG Orders The Recruitment Of Constables For Community Policing