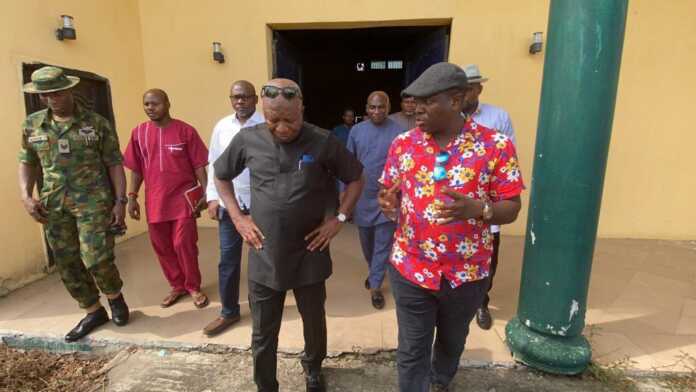 The Interim Administrator, of the Presidential Amnesty programme (PAP), Col. Milland Dixon Dikio (Rtd), has continued his tour of strategic private and public facilities in the region, in a bid to secure training centres for beneficiaries of the programme.

Dikio who had since assumption of office,  expressed his commitment to make the PAP entrepreneurial based, visited the Bayelsa Garment hub facility and the 500 fish farm in Igbogene.

The retired Army Colonel had also recently visited the Maritime University in Okerenkoko, Delta State, to further explore the options available in the region towards the training and empowerment of ex-agitators.

According to a statement from the Amnesty Office, the latest visit was sequel  to an agreement between the Bayelsa State Government and the PAP to collaborate and build the capacity of youths in the state and the region.

Dikio applauded the vision behind the garment factory and the fish farm, describing them as a worthy venture that can transform the state’s economy and take more young people out of the streets.

He said such investments is capable of enhancing the growth of SMEs, facilitate the empowerment and development of people in the Niger-Delta and make the region the new economic hub of Nigeria.

Dikio said: “The idea behind the new training model is for the delegates to see the entrepreneurial side of things and seek to own their own and that is why we are here. To see some of the facilities in the state that will give us a guide.

“Like this factory, the delegates can be trained to own their own designs, carve a niche for themselves, like the Calvin Kleins of the world. People from all over the world can then order these indigenous designs and that opens that doors for export.

“For the fish farm, we can have them train in Aqua Culture, and that is another very profitable area of entrepreneurship. So the options are there and we will utilize it”.

While taking the Amnesty Boss around the fish farm, the Managing Director, Aquaseas Company Limited, Mr. Steve Okeleji disclosed that some of the people that were trained in the facility now have their own farms and about 50 of them are in production.

“Those we trained on fish processing too, are also in production, they own their personal farms and are doing very well for themselves.

“We are currently training another set of people that will be given smoking cages that will ensure that fish is dried with minimal carbon presence. A move away from the traditional way of smoking fish with lots of carbon”.

Ijaw progressives to Buhari: give us competent, experienced,...