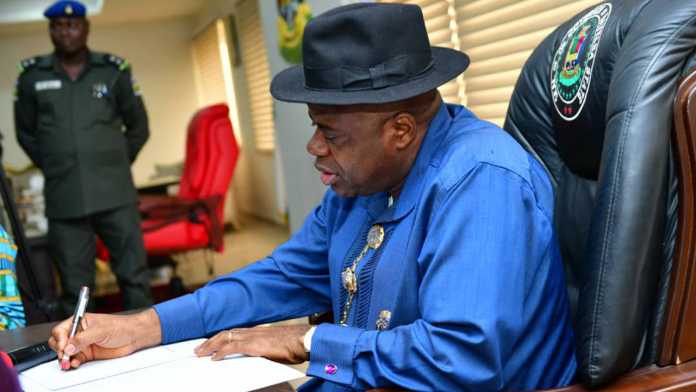 Saturday, July 25, 2020, was a typical day in Yenagoa, the capital of Bayelsa state. It was the last Saturday of the month of July which heralds the scanty movements of people on the major roads in the city except of course, men of the state Environmental Sanitation Authority who go about enforcing the directives of the Governor.

Their traversing will soon amount to a busy day for the court. The Bayelsa State Sanitation Court, sitting beside Fire Service, Yenagoa. Hundreds of people were hauled there. It was like an army of agitated or distraught people milling about the court’s entrance. Among them were the elderly, young ones, women and even men.

It was like Bazaar just outside the court’s premises. Those who are coming out of the court were handing a piece of paper over to a woman NAIJA LIVE TV later identified as the court’s clerk before they are asked to go. Our curiosity led us inside the court to witness what was truly going on.

The number of people we saw inside the courtroom sitting in close proximity without any form of distancing or putting on face masks was even more than the numbers waiting outside.

A lady is heard reading a charge sheet to 15 people who were all in a tiny box. They all pleaded guilty to their alleged offence and charges.

There was no lawyer in sight. The only man that looked closely to a lawyer was a man dressed in ashed colored suit who identifies himself as prosecutor. Upon enquiry, we noticed that he is not a lawyer called to the Nigerian Bar.

The visitors’ waiting shed, near the court’s entrance, is filled up with people – some waiting for their arrested loved ones; some waiting to negotiate the release of their loved ones or goods.

Upon taking their plea, the Magistrate writes her judgment and summarily finds them guilty then calls for ‘allocutus’. Many of them do not even know what it means. The Magistrate proceeds to sentence them arbitrarily for Fine as high as eight thousand naira (₦8,000).

The now convicts are expected to pay this money in order to regain their freedom. Once you pay, a piece of paper is given to you as a form of acknowledgment (receipt). It is that piece of paper that the now convicts were handing over to the court’s clerk who was waiting at the door that will in turn return the paper to the court as a form of accountability as to the number of persons that have been fined for the day. A close look at the paper shows that it is not a receipt acknowledging payment as first thought. It is a piece of paper having only the stamp of the court with nothing else written on it.

Once returned, the convicts have no proof to show that they parted with money. Many are just happy that they have regained their freedom back.

At about 10.11am when NAIJA LIVE TV reporter arrived the premises of the Sanitation Court, the court was still in session. The one we suspected to be a prosecutor was confronting a man by the court’s window asking why the man was recording the court.

It turned out that the man who was only wearing a shirt and jean trouser introduced himself as a state counsel who was only witnessing proceedings. He thereafter on enquiry, informed the court that “his person” was in court. The court informed him that his person had already been convicted. The lawyer quickly paid the Fine and left with his person.

We noticed that the people who were accused had no legal representatives.

The Court simply put a set of 15 people in the dock, their charges are read, they all plead guilty and pay Fine. Some pay as high as ₦8000 for Fine. This is done routinely. NAIJA LIVE TV reporter counted about 12 different sets of 15 people each in the dock.

No receipt was issued to the convicts who paid their fines. Just a piece of paper that the court collects as the convicts are about leaving the court premises after paying the money. The fine is not paid to any Bank account. It is a Saturday. As this went on, some people positioned just outside the court room with their Point of Sale (PoS) machine to enable those who do not have money make withdrawals.

NAIJA LIVE TV reporter was sitting close to the door. He soon noticed a young man asking the prosecutor and the court clerk some questions at the door. The young man says he is a Lawyer and he came with an application to the court. He was asking for the certified true copy of the record of proceedings, the charge sheet and judgment entered against his client. He asked the prosecutor when next the court will sit or if it is just a Saturday court only.

The Magistrate remonstrated the lawyer verbally after the Lawyer informed the court that he came with an application and let him go. The Lawyer says he will return by Tuesday with his application since the court informed him that it sits on Tuesdays and that he will get what he requests for on Tuesday.

Having been warned by a Lawyer friend that the Sanitation Court was not well disposed to Spectators, I had dressed in a suit and a tie so as to easily pass for a Lawyer. I later realised that even so, a Lawyer might not be permitted in the court except he has a client or is one of the familiar clients-seeking private lawyers who daily resume at the court to await the suspects being brought in droves by the Sanitation men.

Perhaps due to the time of the day and the large number of defendants the court was confronted with, the arraignment was conducted in a hurry and without attention to details.

No sooner had the magistrate, who appeared to have had a busy day, entered the courtroom and taken his seat than the registrar, holding a charge sheet, began to invite the defendants into the dock for their arraignment.

NAIJA LIVE TV reporter observed that the defendants were charged under Section 37 (1) (d) of the Bayelsa State Environmental Sanitation Law, 2006. However, subsection 2 of the Law prescribe the fee not to exceed ₦5000 for first timer offenders. Yet, people were Fined up to ₦8000 as first timer offenders.

Most of the defendants were unfamiliar with the court process and had no lawyer. Majority appeared scared and some were weeping.

“You! come and kneel down here” the Magistrate said to a lady crying. “If you cry, you will be charged with contempt of court,” she said.

“When I dey tell you something, you dey do useless shakara. Now no be you dey on your knees dey beg?” the magistrate queried.

After this, she began to call upon the defendants, one after the other, demanding whether they were guilty or not. She sentenced them as she pleases. Even a juvenile who gave her age as 17 was not spared. She was Fined ₦6000.

Those who could not afford to pay the Fine were remanded in prison custody.

There were some allegation of extortion against the Bayelsa State Sanitation officials. From impoundment of monies to people’s phones. A convict was wouldn’t want his name to be on print said he was traveling to Onitsha to get items in preparation for his traditional marriage when we was arrested and money worth ₦300,000.00 that was with him was impounded by the sanitation officials.

CHALLENGING THE PROPRIETY OF THE CHARGES AND CONVICTION

Speaking with NAIJA LIVE TV over the phone, a human rights lawyer, Ebikebuna Aluzu questioned the legality of the charges preferred against the people and their subsequent conviction saying such is illegal and unconstitutional.

Aluzu who said he will explore all available legal means in ensuring that the era of trying and convicting people for non-existing offense in Bayelsa state comes to an end says there is no offence in the body of criminal law of Bayelsa state known as refusal to take part in monthly sanitation exercise for which people were tried and convicted.

He believes it is an act of impunity taken too far by the Executive to exploit innocent Bayelsans.

Aluzu said sanitation is a voluntary exercise and it is not something anyone can be compelled to take part in talk more of convicting a person for disobeying without a written law to back same up.

“The whole process leading to their conviction is in clear violation of the provisions of the law without any justification.” He stated.

JUST IN: Emir of Zazzau, Shehu Idris, dies at...