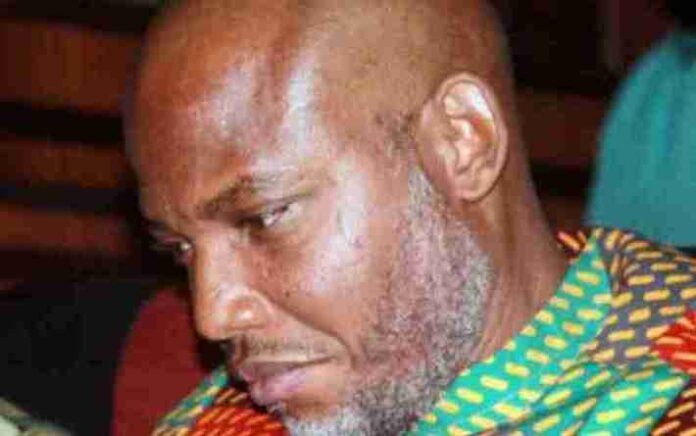 The proscribed Indigenous People of Biafra, IPOB, says its leader, Nnamdi Kanu has refused to eat in the custody of the Department of State Service (DSS) since his re-arrest on Sunday, June 27.

The separatist group also said that Nnamdi Kanu should be allowed access to his lawyers, doctors, and family members as part of his fundamental human rights.

The IPOB disclosed this in a communique signed by its media and publicity secretary, Emma Powerful on Friday.

“His health has been deteriorating in the DSS cell as he has refused to eat their food since almost one week they kidnapped him. We demand that DSS should allow him access to his lawyers and family members for this is his lawful right. And his lawyers are being harassed and we pity them and Nigeria if anything happen to our leader Mazi Nnamdi Kanu the Nigeria Government and security agencies must understand the product we are made of and how prepared we are.

“Southeast Governors and Ohaneze including politicians in the region must ensure that nothing bad happen to Nnamdi Kanu because Miyetti Allah and sympathisers of terrorists are going free in the country but ordinary person and innocent citizens are being molested everyday because they are Biafrans. We won’t accept that.

“We also want to tell the DSS to jettison any plans to inject our leader with poisonous vaccine that will make him die slowly. Any such attempt will come with unimaginable consequences! Nnamdi Kanu must not die in custody!” The statement read partly.