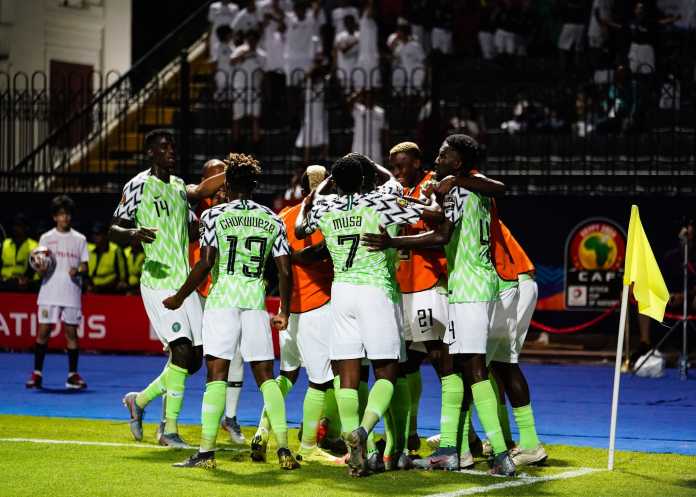 Nigeria has become the first team at the ongoing Africa Cup of Nations in Egypt, to book a spot in the last 16.

The Super Eagles defeated their biggest rival in Group B Guinea by a lone goal on Wednesday, to confirm their place in the next round.

So, what are the five things we learnt from the fixture at Alexandria?

1. Easy draw in the next round: With Gernot Rohr’s all but certain to finish top of Group B, they will likely get a third-placed team in the Round of 16. Although there are no small countries anymore in (African) football, it would be better to face the heavyweights much later in the competition.

2. Omeruo, Man of the Match: The defender, who spent last season on loan at Leganes from Chelsea, was in sparkling form against Guinea. Solid at the back, Omeruo proved decision at the other end of the pitch, rising highest to head in the winner. A lot of fans and pundits were surprised he kept his place ahead of Troost-Ekong, to partner the returning Leon Balogun. But on the strength of today’s performance, he justified his selection.

3. The Iwobi conundrum: Following the victory over Burundi, there were widespread calls for Rohr to drop skipper John Obi Mikel and start Alex Iwobi as a no. 10. The German listened and made the change. But the Arsenal man was a huge let down overall. He was jittery and clumsy all through the first half and only improved a bit after the break. The search for his uncle Jay Jay Okocha’s replacement is still on.

4. Akpeyi much better: Although it took the Kaizer Chiefs’ stopper just two minutes to flap at his first ball, he produced a much more assured performance. Credit has to be given to the Omeruo-Balogun axis in front of him, that served as a wall of resistance.

5. Kick Keita Out: Paul Put started the Liverpool midfielder against the Super Eagles, hoping that he would pull the strings against the three-time champions. Instead, Keita was given a kick around by Wilfred Ndidi and Oghenekaro Etebo and hardly stayed on his feet to influence the game. Jurgen Klopp must have been grinding his teeth, as his man kept falling and rolling around in agony. He was eventually substituted off.

Dickson shares his concerns as Lyon takes over Feb....

Trouble: Mbaka to be barred from preaching soon –...

Keyamo hails Anthony Joshua for prostrate before Buhari in...