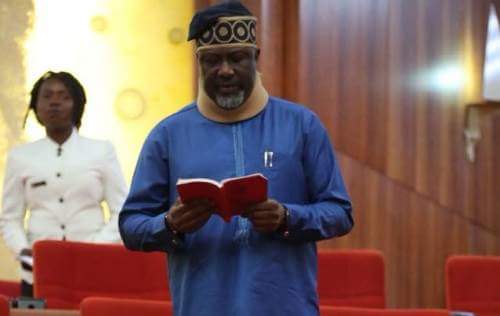 Buhari announced on Wednesday that the annual Democracy Day celebration will now hold on June 12, rather than May 29, and that MKO Abiola would be posthumously awarded the highest honour in the land, GCFR.

Watch Video: Dino saying MKO should not be honoured

Similarly, Abiola’s running mate, Ambassador Baba Gana Kingibe, is to be invested with a GCON, while “the tireless fighter for human rights and the actualization of the June 12th elections and indeed for democracy in general”, the late Chief Gani Fawehinmi SAN, is to be awarded posthumously a GCON.

But speaking on the floor of the Senate on Thursday, Melaye argued that the GCFR honour could only go to a Nigerian; and Abiola, since he is dead, is no longer one.

“I am a democrat; I believe very sincerely that Chief M.K.O Abiola deserve even more than the President has pronounced because he is a true patriot, philanthropist and should be sole decorated,” Melaye said.

“But Mr. President, we are governed in the country by the constitution and extant laws. No matter how beautiful a situation is, the law of the land remains the law of the land. Section (2) says ‘a person shall be eligible for appointment to any rank or holder unless he is a citizen of Nigeria. A dead man is not a citizen of the Federal Republic of Nigeria’. We should not be emotional about this.

“The law remains the law. 3(2) subject to the next notice, ‘A person shall be appointed to a particular rank of an order when the President receives him in person’. Mr. President, they said ‘in person’. For us to do what we are supposed to do, we would have to amend the provisions of this Act because anything we need to do, we have to do in accordance with the provisions of the law.”