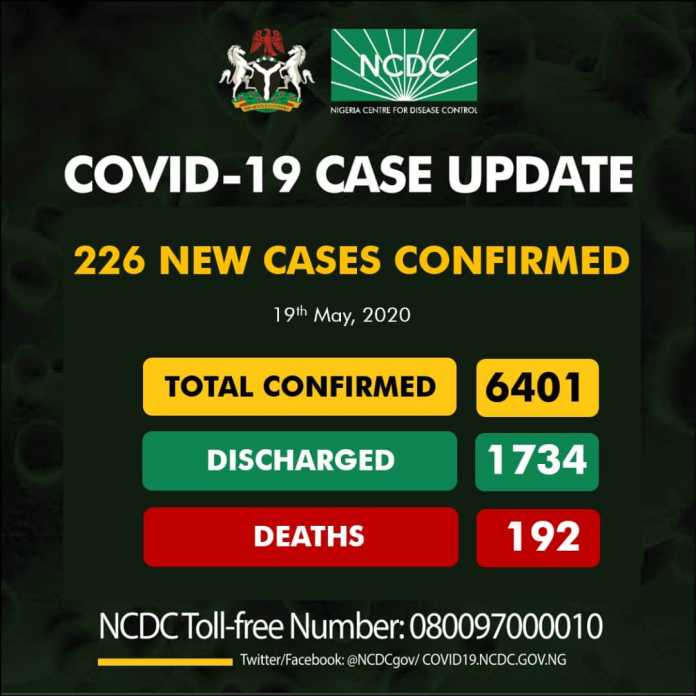 Nigeria has recorded 226 new cases of coronavirus, bringing the total number of confirmed infections in the country to 6401.

The Nigeria Centre for Disease Control (NCDC) made this known on Tuesday.

The centre said that one patient died of coronavirus-related complications in the country, bringing the total number of fatalities to 192.

No new state has reported a case in the last 24 hours.

The agency also reiterated the need for people to self-isolate after being exposed to the virus, saying that it is critical to stay in isolation if positive to reduce the risk of spread of the virus.

It pointed out that most people infected with COVID-19 have mild to moderate symptoms & recover, while some others have severe symptoms and may die, especially older people & those with underlying illness.

Meanwhile, the Federal Government has said it will only re-open the nation’s economy fully when it is able to strike a delicate balance between safety and economic considerations.

This was as it explained the whereabouts of a 15-member Chinese Medical Team after initially engaging in several backs and forth on the issue.

It also lamented the growing number of casualties with regards to the Covid-19 pandemic, saying many of those who died recently, apart from having some underlying illnesses, had embarked on some form of self-medication or home care.

These were disclosed Tuesday in Abuja during the daily briefing of the Presidential Taskforce PTF on Covid-19.

The federal government also announced that it has met the relevant committees of the National Assembly in its bid to deepen its collaboration with the legislature and strengthen its National Response to the pandemic.

It added that about five drugs, including hydroxychloroquine, are currently being analysed by research institutes in the country to determine their efficacy in the treatment of Covid-19.

Businessman Drags Police Officer To Court For Sleeping With...