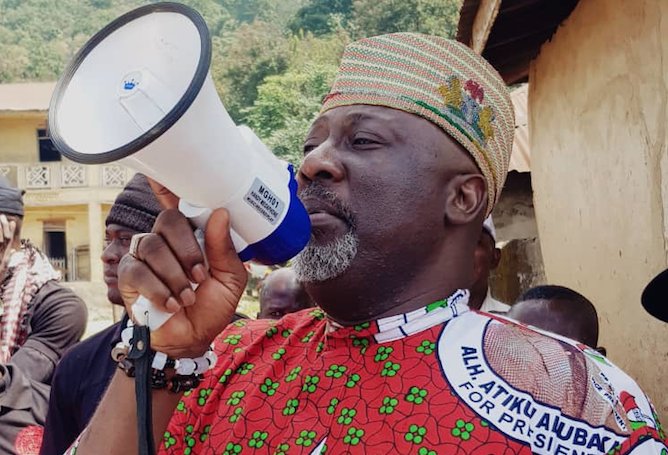 The former vice-president, on March 23, formally declared his intention to run for the 2023 presidency on the platform of the PDP.

A few days before announcing his presidential bid, North-East Business Forum, a support group, purchased the N40 million nomination and expression of interest forms for him.

Raymond Dokpesi, former chairman of Daar Communications, led a delegation to submit the forms at the Peoples Democratic Party (PDP) headquarters in Abuja on Monday.

Speaking during the presentation, Melaye described Atiku as “one single Nigerian we must show confidence in”.

He said the former vice-president possesses the “art of civil administration and the rudiments of politics”.

“We are here to present the form of the only unifier of the Federal Republic of Nigeria,” he said.

“We are here to present the form of the Ronaldo and Messi of PDP.

“By the grace of God, as I hand over the microphone to chief Raymond Dokpesi to present these completed forms to the national organising secretary, I want to state unequivocally that many of us when we call on God, God doesn’t give us missed calls.

Shehu Sani, ex-senator representing Kaduna central, was among the delegation.

I will sell Nigeria’s refineries if elected president – Atiku

Deleting of Deborah Samuel tweet: Express your anger at 2023 polls – Atiku to Nigerians