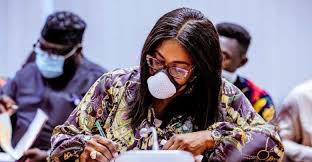 ABUJA – A female member of House of Represen­tatives, Tolulope Akande-Shadipe, on Thursday allegedly or­dered the arrest and deten­tion of an Aide to the Deputy President of the Senate, Sen. Ike Ekweremadu.

The Oyo lawmaker who is of the ruling All Progressives Congress (APC), ordered the detention of the Senior Spe­cial Assistant to the DSP on Print Media, Mr Jide Babalo­la, for allegedly bumping into her in an elevator at the House of Representatives wing of the legislative complex.

Speaking on the develop­ment via the telephone, Mr. Jide said it was a minor issue that did not necessarily war­rant the Ill-treatment he got from the lawmaker because bumping into someone which was never a crime, more so that it didn’t happen.

“I was coming down from an elevator, there were about six seven people in the eleva­tor. So it was a bit crowded for all of us.

“Then she (Hon. Sadipe) said I almost bumped into her, and she continued accusing me that I bumped into her and then I said, ‘Madam, I didn’t bump into you.’

“At that point, I didn’t know that she’s an honour­able member, so I referred to her as madam which obvious­ly didn’t sit well with her. So it now made things worse, by the time we got to the ground floor, and then it became something else. So one of the persons in the lift tried to beg but she was adamant.

“As I tried to explain that, look I’m a man of 55 years old and I have put in 31 years in journalism so I will not intentionally hurt a woman. And then she started scream­ing that do you know who I am, I am honourable Sadipe Akande. So in the process we ran into some lawmakers that were coming in with a minis­ter, about four five of them. As soon as she sighted them she continued to scream so one of them called me and asked what the problem is. I tried to explain. At some point, one of them said no matter how right I think I am, that I should apologise. So I did.

“I said honourable, what­ever it is I apologise, I’m sorry about whatever hap­pened let bygone be bygone. And I didn’t know that will make her angrier. So the Lawmakers left and as I was about to leave, although I had apologised repeatedly, and I was even apologizing in the name of God. So I thought the matter had subsided, as I was about moving to the exit she kept following me behind. Just at the exit where securi­ty personnel usually sit she beckoned on the sergeant at arms to pick me up, that she’s going out until whenever she’s done, that they should hold me. I never knew it was a crime to bump into some­one, I never robbed shoulders with her. And this incident happened in a public elevator, it’s not an elevator meant for lawmakers. I never entered el­evator meant for lawmakers”, Jide pointed out.

When reached for com­ment to find out what exactly happened via a phone call, the female lawmaker responded via a text message asking that the questions be forwarded to her via sms.

In her response which she sent to a colleague who put the call to her, she said, “This is a case of Gender ha­rassment. He got into the ele­vator after me. I was talking to a staff of NASS. All I said to him was Please don’t step back and he turned on me, in­timidating me. Because I am a woman. This is a case of Gen­der harassment and gender intimidation”, she explained.

When asked as to why she ordered for the arrest and detention of the gentleman, even when he had shown remorse and apologised, she denied ever ordering for his arrest that the security peo­ple only intervened after she raised the alarm.

“He was held by the NASS security as I felt intimidated by him. and I made a formal complaint, which they are free to investigate. The DSP (Deputy Superintendent of Police) I know will not con­done what he has done. I have since left the building to a meeting outside NASS (Na­tional Assembly). Then I see his media blackmail floating around on social media”, she stated. In order to unravel the truth be­hind the lawmaker’s claim of harassment and Intimi­dation, the accused Aide was again reached for further clarifications.

He said, “I did not intim­idate nor harass her and again, I kept referring to her as ma and it was only when I came out of the lift that I re­alised she was an honorable member but at no time did I insult or intimidate her. And for emphasis, I was in a pub­lic lift not the one meant for honourable members”.