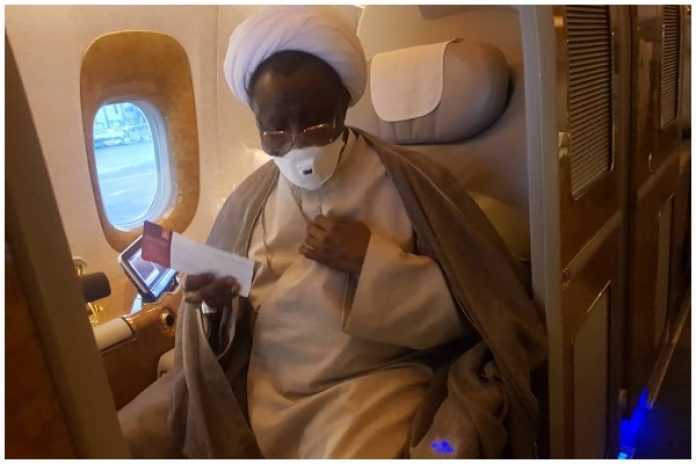 Barely 96 hours after landing in New Delhi, India, for medical treatment, the leader of the Islamic Movement in Nigeria, Sheikh Ibraheem Zakzaky, has discharged himself from the Medenta Hospital and is expected to arrive in Nigeria on Friday (today) morning.

El-Zakzaky was flown to Medenta Hospital in New Delhi alongside his wife, Zenaat, on Monday for medical treatment for an undisclosed ailment.

He had however complained about the situation in India, saying he was caged and not allowed any freedom.

The Chairman of Free El-Zakzaky Committee, Abubakar Abdurahman, said on Wednesday that the IMN leader might be brought back to Nigeria if the condition of the hospital did not improve.

The President, Media Forum of IMN, Ibrahim Musa, confirmed to one of our correspondents that El-Zakzaky and his wife, Zeenat, left New Delhi around 5pm Nigerian time.

The 8,080-kilometre journey by air from India to Lagos, according to travelwatch.com, will last 10 hours and 34 minutes.

But it was, however, learnt that the plane conveying the Shi’ites’ leader and his wife, would make a stopover in Addis Ababa before proceeding to Nigeria.

But another IMN source told The PUNCH that as of 8.31pm on Thursday, the Shi’ites’ leader had yet to leave India.

It was gathered that the IMN leader would return to the DSS custody where he and his wife were being held since 2015.

Musa in a statement blamed alleged interference by the Federal Government for the scuttling of the IMN leader’s planned treatment.

It said, “Following lack of breakthrough in the impasse that ensued in the treatment in New Delhi of Sheikh Ibraheem Zakzaky, it is now confirmed that the Sheikh is on his way back to Abuja.

“In a video message sent through his office, the Sheikh said it was decided that they would be taken to the airport to be flown back to Nigeria. He has left Delhi by 17:00 Nigerian time (on Thursday). He prayed that may that be the best option in the circumstances.

“The Nigerian government’s interference and scuttling of the whole process rather than supervision as ordered by the court is the direct cause of the impasse.

“The government never wanted the medical leave in the first place and did whatever to stop it by all means possible.”

The Federal Government had earlier refuted El-Zakzaky’s allegations, stating that he attempted to violate the conditions of his treatment by making unreasonable demands, including insisting on lodging in a five star hotel in New Delhi with free access to all manner of visitors.

A source close to the DSS confided in The PUNCH, in Abuja, on Thursday, that the service was prepared to receive him.

The source said, “He was taken from the custody of the DSS on the instructions of a court. The Sheikh was only released to attend to his health at an Indian hospital and return unless there is another court ruling or a decision to take him to a medical facility here on our terms, he returns to the DSS.”

Shi’ites’ leader can be treated in Nigeria, says NMA

However, the Nigerian Medical Association has said El-Zakzaky can access perfect medical treatment in Nigeria for his ailment instead of going to India in the first instance.

The Federal Government also came out and accused El-Zakzaky of “becoming uncontrollable” in India.

The National President, NMA , Dr Francis Faduyile, in an interview with our correspondent on Thursday, said that although it was the rights of anybody to seek medical treatment wherever they wished, El-Zakzaky did not look like someone suffering from an ailment that was beyond what could be handled in Nigeria.

He added that even if the IMN leader had to seek medical treatment in India, he had to submit himself to the rule of the hospital treating him.

He said, “It is the fundamental human right of anybody to seek medical treatment wherever they want it. However, many of the cases that are taken outside are cases that can be treated in Nigeria perfectly.

“On the case of El-Zakzaky, I don’t know why he chose India for treatment and even though I am not aware of his ailment, I still think it does not look like he is suffering from an ailment that cannot be properly treated here in Nigeria.

“It was not the Nigerian government who offered to take him to India, a court granted him the leave to travel abroad. It is important for us to know that even if he were to seek treatment abroad, he should conform to the rule and regulation of the hospital. That is the major reason he is having issue in India.”

Faduyile says in many cases, people travel abroad for medical check-ups or treatment to show-off their wealth and not necessarily because they could not find a solution to their ailment at home.

He advised government to come up with a policy that would ensure that public money would not be used to fund the trip of any public officer travelling abroad for treatment.

“In fact, as a matter of national interest, our public officials should have their medical treatment within the shores of Nigeria so that we can have confidence in our health sector and build the sector.”

JUST IN: Inmates In Kaduna Prison Attempt Jailbreak Over...