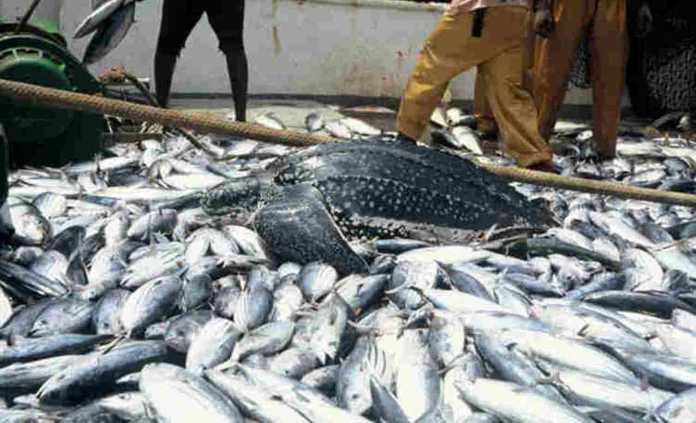 ENVIRONMENTAL activists in Rivers State and the Ijaw Youth Council (IYC) have called for a declaration of the strange appearance of dead fishes lining the Bonny and Andoni coastal lines as a “health emergency” to forestall negative impact on humans in the areas.

This came as National Oil Spills Detection and Response Agency, NOSDRA, said that it found no oil leaks linked to the massive death of fishes that were washed ashore and litter the Atlantic coastline of the Niger Delta region.

The concern raised by a five man environmental investigation team from Bonny, led by Godswill Jumbo, came as the Rivers State Government warned against consumption of the dead fishes said to have flooded Bonny and Port Harcourt markets.

Jumbo said, “The breed of croaker, popularly known as ‘Broke Marriage’ and ‘Onah’ in Ibani dialect is the only observed fish affected by the incident. They were seen dead, littering the shoreline and also floating on the sea and washed ashore by waves.

“When it began last week of March 2020, they were dying in large numbers and residents were filling their baskets and boats, some for domestic consumption, the bulk of it dried and sold to majority unsuspecting consumers both in Bonny and Port Harcourt.

“On the body of the fish, swellings looking like a lesion or boil could be noticed. When pricked, something like pus gushes. The fish begins to rotten from the tail as against the head. Spread fire to dry, unlike normal fish, it doesn’t dry thoroughly, but rather disintegrate or scatter.

The state Commissioner for Environment, Egbis Tamunor, following a confirmation visit to the area, said, “We have sent samples to some laboratories. What we want to know is whether there are poisonous materials in the fishes or some materials are related to oil activists because that area is an oil berth.

“We expect to get results of the test within the next one week. My advice to the people along that region is not to eat those fishes. Times are hard, things are difficult, but we can’t afford high level carcinogenic or toxigenic materials in our people because we may not know the consequences of such.”

“We Are Under Serious Life Threats” – Ijaw Youths Council Cries Out …Says, Fishies are dying Mysteriously in our shorelines due to oil and gas activities

The Ijaw Youths Council, the umbrella body housing and aimed at protecting the interest of the indigenous settlers of the Ijaw tribe has called on relevant government authorities and stakeholders on the need to take alacritous measures in protecting the lives of members of its communities, who are being exposed daily to the harzadious substances surrounding their areas.

In a letter obtained by NAIJA LIVE TV and signed by the acting chairman IYC Eastern zone, Comrade Tobin James, which he titled “COASTAL COMMUNITIES OF THE IJAW NATION UNDER THREAT: FEDERAL GOVERNMENT AND OTHER KEY STAKEHOLDERS MUST LIVE UP TO THEIR RESPONSIBILITIES”, the Chairman pointed out several pipeline locations, which have been constituting unspeakable threats to the settlers of the coastal areas.

“Costal communities of the Ijaw Nation is under threat due to oil and gas activities in the area both onshore and offshore. Recently, members of these communities have experienced a surge in the surfacing of dead fishes, littering its coastlines and internal creaks. They have also noticed the flow of crude oil on the waterways, creeks, forests and mangroves.”

“Apart from the truth that there is a barrage of oil and gas facilities surrounding these communities, it is also clear that the companies who own these facilities are not pertubed of the environmental impact of these facilities to the host Communities except of course in the media or on papers.”

He stressed further that:

“There is a crisscross of pipelines both onshore and offshore including other facilities like oil derigs and FPSOs belonging to Shell, NNPC, Agip, Total, NPDC, NLNG, Mobil etc. We strongly and reasonably believe that there are gas leakages from some of these under-water pipelines conveying gas to NLNG, which have resulted into the poisoning of some marine lives that couldn’t withstand the hazard and leading to the floating of thousands of croaker fishes and others on the shorelines of Bonny, Andoni, e.t.c. It will suprise the world to know that these companies and Government Agencies are not physically doing anything substantial to curb the menace caused by their business activities.”

“Also, apart from the leakages in Adamakiri that we noticed, there is a pipeline maintenance operation being carried out by Anmortor Nigeria Limited in a manner that has evoked huge consequences on environmental sustainability and ecological succession. There were also leakages found at Oloma in Bonny Local Government Area and NNPC pipelines in Okrika Local Government Area. These unhealthy and hazardous occurrences and ways of handling oil and gas activities in our communities are very dangerous and turning our communities into valleys of death and misery. The irresponsible spate of negligence and recklessness, as we believe, shouldn’t be recorded in this 21st century.”

“Interestingly, Oyorokotor in Andoni Local Government Area in Rivers State, which happens to be the largest fishing port in Africa, is currently in serious danger as a result of unchecked dredging activities.

The contractors in charge have failed to adhere to any form of environmental impact assessment whatsoever, hence, their work is causing an erosion of the shorelines which will now require shore protection to keep the environment safe from further degradation.

The area is one of the hardest hit by the floating fish incident and the affected people have made appeals to the Rivers State Government, IOCs, Federal Ministry of Environment and Ministry of Niger Delta Affairs respectively but till now, no response has been gotten yet.”

Ending his letter, he further pointed out how badly the substances have affected them. He did not also forget to call on some notable stakeholders in the society to come to their aid hurriedly. He added that:

“This unfortunate incident, if not speedily addressed, the negative impact it has on the survival of Ijaws will double. The harm these noxious substances have caused to our environment is not only limited to the destruction of our air quality, they have also facilitated the poisoning of our waterways, destruction of our farmlands and the killing of Acquatic and marine seafoods. Therefore, we call on the Federal Government via the Ministry of Niger Delta Affairs, the Ministry of Petroleum, NEMASA and other key stakeholders and IOCs to come to a round table and profer effective and lasting solutions to these problems.”

…No oil spills link with dead fishes in N/Delta – NOSDRA

The National Oil Spills Detection and Response Agency (NOSDRA) has said that it found no oil leaks linked to the massive death of fishes that float and litter the Atlantic coastline across the Niger Delta region.

The agency said it was coordinating a muli-agency investigation aimed at unraveling the cause of the reported massive death of fishes within the nation’s territorial waters and was looking beyond the oil industry..

Mr Idris Musa, Director-General of NOSDRA said in a statement availed to newsmen on Thursday that investigation was already ongoing despite the COVID-19 lockdown.

Musa explained that officials of NOSDRA deployed from the agency’s office in Warri, Yenagoa and Port Harcourt have conducted site visits to the Atlantic coastline in Delta, Bayelsa and Rivers states to collect water and fish samples for tests.

“The National Oil Spills Detection and Response Agency (NOSDRA) carried out a reconnaissance of the area in Delta where we first got the report through a member through a member of a Non-governmental Organisation.

“There was no incident of oil spill within the area of reported dead fishes, notwithstanding that a few dead fishes were seen along the shoreline.

“The Agency proceeded to collect samples of water, sediments and some of the dead fish for laboratory testing. In doing so the agency brought onboard other relevant agencies of government that have mandate on our territorial waters.

“Also included is the National Environmental Standards and Regulations Enforcement Agency (NESREA) for an all hands on deck assessment of the possible cause or causes of death of the fishes in such large numbers,” Musa said.

The NOSDRA Chief Executive said that the results of ongoing laboratory analysis would be compared with results from the participating agencies to profer an effective solution and ensure a more stringent regulations in future.

How We Scouted For Pregnant Teenagers, Made Millions Selling Their Babies After Delivery – Arrested Rivers Couple Operating Baby Factory

Nigeria is in a terrible state of underdevelopment –...

Magu spends night in police custody as plot to...