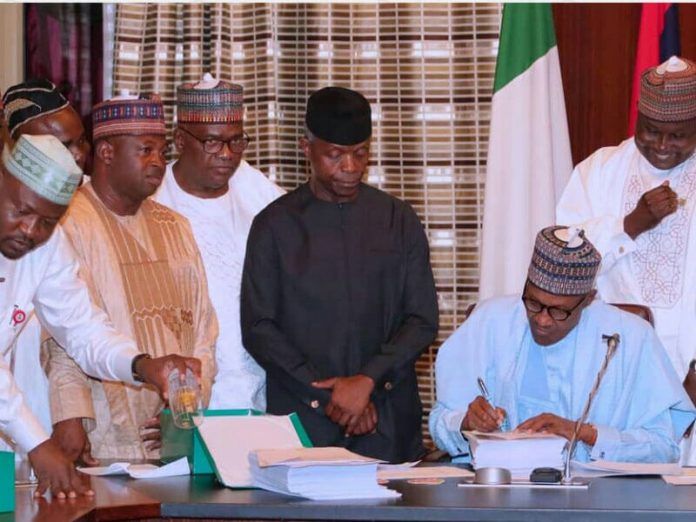 President Muhammadu Buhari Wednesday accused the National Assembly of slashing N347 billion from the allocations to 4,700 projects in the 2018 budget submitted to the parliament for consideration and introducing 6,403 projects, amounting to N578 billion.

The President said this in his speech at the signing into law of the 2018 Appropriation Bill at the State House, Abuja.

“I am concerned about some of the changes that the National Assembly has made to the budget proposals that I presented. The logic behind the constitutional direction that budgets should be proposed by the Executive is that, it is the Executive that knows and defines its policies and projects. Unfortunately, that has not been given much regard in what has been sent to me,” the President said about the budget that was passed by the National Assembly.

Noting that “many of the projects cut are critical and may be difficult, if not impossible, to implement with the reduced allocation”, Buhari said “some of the new projects inserted by the National Assembly have not been properly conceptualised, designed and costed and will therefore be difficult to execute.”

He also noted that many of these new projects introduced by the National Assembly were added to the budgets of most MDAs with no consideration for institutional capacity to execute them or the incremental recurrent expenditure that may be required.

“As it is, some of these projects relate to matters that are the responsibility of the States and Local Governments, and for which the Federal Government should therefore not be unduly burdened”, he said.

In his speech, Buhari cited some of the critical projects from which cuts were made.

The President said: “The provisions for some nationally/regionally strategic infrastructure projects such as Counter-part funding for the Mambilla Power Plant, Second Niger Bridge/ancillary roads, the East-West Road, Bonny-Bodo Road, Lagos-Ibadan Expressway and Itakpe-Ajaokuta Rail Project were cut by an aggregate of 11.5 billion Naira.

“Similarly, provisions for some ongoing critical infrastructure projects in the FCT, Abuja especially major arterial roads and the mass transit rail project, were cut by a total of 7.5 billion Naira.

“The provisions for various Strategic Interventions in the health sector such as the upgrade of some tertiary health institutions, transport and storage of vaccines through the cold chain supply system, provision of anti-retroviral drugs for persons on treatment, establishment of chemotherapy centres and procurement of dialysis consumables were cut by an aggregate amount of 7.45 billion Naira.

“The provision for security infrastructure in the 104 Unity Schools across the country were cut by 3 billion Naira at a time when securing our students against acts of terrorism ought to be a major concern of government.

“The provision of the federal Government’s Housing programme was cut by 8.7 billion Naira