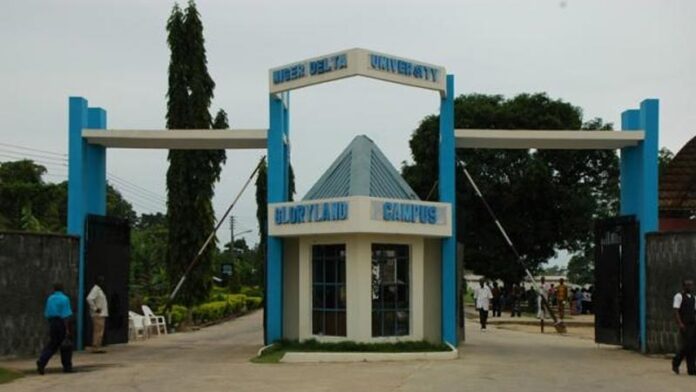 The Bayelsa State Gov’t through the management of the Bayelsa State-owned Niger Delta University on Wednesday announced the shutdown of the school, following protests by students.

The announcement was contained in an official memo dated July 7, 2021, and signed by the Registrar of NDU, Mr Benjamin Joffa.

The students had on Monday commenced a two-day peaceful protest against decisions by the university authorities to introduce school uniforms, ban Student Union Government activities and close fees portal for old students, among others.

They marched around the main campus at Amassoma chanting solidarity songs and demanding the cancellation of the decisions.

The placard-carrying undergraduates alleged that engineering students would pay as much as N30,000 each for their uniforms while students of other faculties would pay N20,000 each.

They have called on Governor Douye Diri to sack the Vice-Chancellor, Prof. Samuel Edoumiekumo for his high-handedness and outrageous policies.

In a copy of the memo sighted by our correspondent, the institution’s management said that academic activities had been suspended indefinitely.

It also asked all students to vacate the university campuses not later than 3pm on Wednesday.

The statement read, “Following the ongoing unrest in the university, I am directed to inform the general public and the university community that academic activities have been suspended indefinitely with immediate effect.

“Consequently, all students are directed to vacate the university campuses and its facilities on or before 3.00pm today (Wednesday, 7th July 2021).”

Before the closure of the school, there were reports that the state government through the office of the Commissioner for Education, Gentle Emelah, and the House Committee on Education had separately intervened in the crisis and held meetings with the university’s officials led by Edoumiekumo.

The vice-chancellor had in June come under attack over discrimination against a physically challenged man who was a deputy bursar of the school, which sparked a protest.

The physically challenged man was reportedly denied the opportunity of appearing for an interview for the position of bursar. He was suspended following the protest, although Governor Diri had addressed the management on the development.