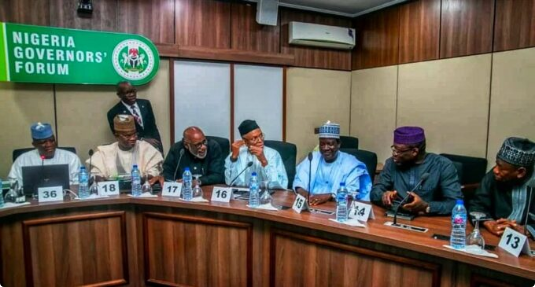 Governors of the 36 states under the Nigerian Governors’ Forum (NGF), will meet with the Judicial Staff Union of Nigeria (JUSUN) on Thursday over the ongoing strike.

On April 6, the union had embarked on a nationwide strike to protest the non-implementation of the financial autonomy of the nation’s judiciary.

After several agitations, President Muhammadu Buhari had signed an executive order granting financial autonomy to the judiciary and state house of assembly in May 2020.

The gazetting of the order was, however, suspended after the president met with governors who later expressed concerns over its constitutionality.

Speaking to journalists at the NGF secretariat in Abuja, Simon Lalong, governor of Plateau state, said the scheduled meeting was to persuade the judicial workers to end the strike.

He added that the governors would have a dialogue with the judiciary workers on Wednesday.

“We were not consulted when we saw a law passed and order came. So, when you are talking about implementation, you’re talking about policy, you don’t wake up because law is passed and you said you are doing it. How? There must be processes,” he said.

“You don’t achieve autonomy in a day. We did it for national assembly, and there was no order 10 for implementation. It was done in stages.

“We’ve had very useful dialogue with both the representatives of the judiciary and the state speakers.

“Yesterday, they were in my state and we all agreed that by tomorrow, we will round it up with all the governors; with their team — judiciary and PASAN — to explain to them that sometimes, people don’t know what they are fighting for.”

Looting: We Hid Palliatives Ahead Of Second Wave Of COVID-19, Nigerian Governors Say