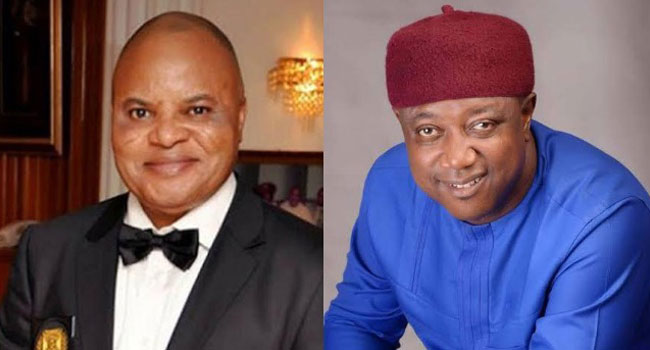 Following the Federal High Court victory of embattled All Progressives Congress candidate, Ifeanyi Ararume in immediate past Imo-north senatorial district bye-elections, his major contender, Frank Ibezim has reacted to the court pronouncement of yesterday affirming Ararume as the validly nominated candidate of the APC, and winner of the elections.

Ibezim while speaking to a correspondent of vanguard said, the judgment was a sad day for democracy as he had already been affirmed winner by the supreme court.

Justice Taiwo is supposed to be reported to the National Judicial Council for judicial recklessness. The issue of who is the authentic candidate of APC for the Imo North bye-election was decided by the Supreme Court in its judgment on February 5, which went in my favor. Araraume was not a party to the bye-election.

It will be recalled that Justice Taiwo had yesterday pronounced a judgment in favour of Ararume, asking the Independent National Electoral Commission to issue a certificate of return to Ifeanyi Ararum.

Justic Taiwo in his Judgment had resolved that Appeal Court judgment in Abuja was invalid and that the 3rd defendant (Chukwuma Ibezim) remained disqualified.

Meanwhile, former governor of the Imo State, Senator representing Imo West Senatorial District, Rochas Okorocha has congratulated Ararume, saying that Ararume who a two time Senator is expected to bring his wealth of experience into the red chambers for the good of the Imo People.