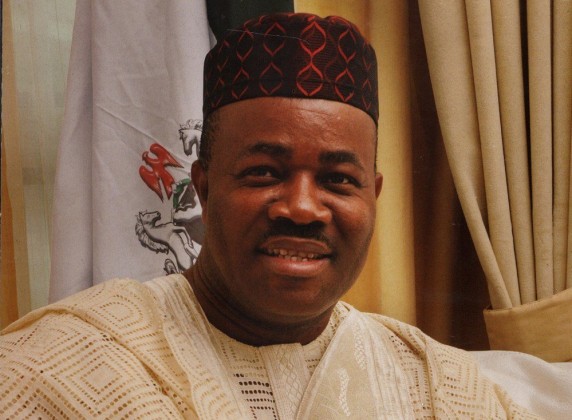 The National Assembly Elections Petition Tribunal sitting in Uyo, Akwa Ibom State, has dismissed the application of the Peoples Democratic Party’s lawyer, Solomon Umoh,SAN, seeking to vacate Senator Akpabio’s petition and set aside the order granted him by the tribunal for inspection of election materials.

The Tribunal’s Chairman, Justice W Akanbi had, on April 2, 2019 granted an exparte order to Senator Godswill Akpabio and the All Progressives Congress for inspection of materials in the custody of the Independent National Electoral Commission.

He also argued that the, “Only ground of obtaining an order must be by motion on notice”, which, according to him, the respondents failed to file.

However, in his ruling on Tuesday, Chairman of the Tribunal, Justice W. O. Akanbi, declared that the PDP’s application for the inspection order to be reversed was an act alien to law.

Justice Akanbi agreed with the submissions of Sunday I. Ameh, SAN, Counsel to Senator Akpabio that Engr Ekpenyong and the PDP suffered no prejudice having been invited to be part of the inspection process.

He said the PDP Counsel only succeeded in “hell-raising technicalities to waste the time of the Tribunal.”

Justice Akanbi said Senator Akpabio’s demand for inspection of electoral materials and the tribunal order granting same were in line with the provisions of Section 151 sub-sections 1 and 2 of the Electoral Act.

The tribunal also declared that PDP’s motion for an order to stop forensic analysis of the election materials was lacking in merit because any party in court is at liberty to any of its preferred method of inspection.

According to Akanbi, “any party is at liberty to adopt any method of inspection. The parties involved in an election can choose to bring in forensic experts. The inspection can also be manually done. Even if the inspection is done with laboratory equipment, the law is okay with that”, he noted.

The Tribunal Chairman likened the PDP’s action to “crying wolf where there is none.”

Speaking to newsmen after the ruling, Mr. Patrick Umoh, who stood in for the petitioner’s lead counsel, Mr. Sunday Ameh, SAN, said the ruling had deepened the judicial practice.

According to him, “the application was filed by the 2nd Respondent seeking to vacate the order of the Honourable Tribunal that granted us access to inspect the electoral materials at INEC.

“We responded, and at the end of the day, the ruling came in our favour, which is to the effect that the order of court to inspect the materials was correct in law. There is no way the 2nd Respondent has been prejudiced, as such the tribunal order was good in Law.

“We salute the judicial system. The ruling is good for the Nigerian legal system. We now know the position of the Law that with an exparte order you can inspect electoral materials as well as maintain your petition in court.”

The tribunal adjourned further sitting to Friday, May 10, 2019.

JUST IN: FG apologises for asking all bank, other account holders to re-register

Business SAINT MIENPAMO - September 18, 2020 - 11:35 am 0
The Federal Government has apologised for asking all account holders in the country’s financial institutions to register their details again.

Obasanjo throws bombshell on State of the Nation, tell...

JUST IN: FG apologises for asking all bank, other account holders...