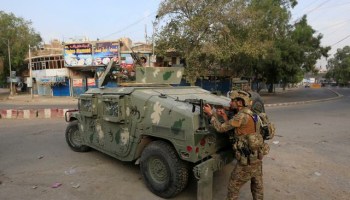 Residents of Essien Udim Local government area of Akwa Ibom State have vacated their communities following the military bombardment in the council to tackle the attacks on security personnel in the area by hoodlums suspected to be members of Eastern Security Network.

A source who pleaded anonymity told our correspondent that a combined military offensive that began at midnight on Monday ended about noon on Tuesday and saw the deployment of helicopters and drones for aerial surveillance while ground troops moved to dislodge and flush out criminal elements.

Recall that Essien Udim which is Senator Godswill Akpabio’s LGA has been under siege for over one month by hoodlums who had targeted and killed police officers, military personnel and destroyed their facilities in the state.

The attack started precisely on February 2021, at Ikpe Annang junction, where a police Inspector was set ablaze inside a police Van, others on duty that night fled for safety.

Later in the months, the bandits attacked the Ikot Afanga community in the same LGA and killed an Inspector of Police identified as Aniekan, while a divisional police station, in the LGA, was also set ablaze by the hoodlums and police vans destroyed.

Just last week Tuesday, three police officers including a Chief Superintendent of Police, Ben Ajide were killed in a failed reprisal operation, while four officers were declared missing after the operation.

The military bombardment on Tuesday was specifically targeted against criminals in Ikot Akpan forest suspected to be harbouring the criminals in the local government.

The military had on Monday asked residents to vacate areas suspected to be used as camps by the criminals.

Staff and students of the Federal Polytechnic Ukana in Essien Udim, located few metres from Akpabio’s residence were forced out of the school campus. The Akwa Ibom State Polytechnic in Ikot Ekpene was also shut.

A lecturer in the University who pleaded anonymity but confirmed the bombardment in the morning said, “well, the bombardment started in the early hours of today. I learnt they sent advance notification that the civilians should vacate the said areas before moving in this morning.

So, the aerial bombardment and the support troops, I think it started this morning around 8am or so. Most students from the Polytechnic could hear the fighters jets and the gunshots. It was an offensive to flush out criminals within three major communities in Essien Udim LGA, the communities are Uwa, Ikot Afanga, Ikot Akpan communities all in the local government” he said.

Also, another resident of the community who identified himself as Akpan said the bombardment was a great relief to the communities who have experienced criminal attacks specially targeted at the police in local communities.

“Yes, there had been cases of insecurity of late with the hoodlums targeting police officers and establishments and of course the military had to come in. Advanced notice was sent to the communities to vacate the areas”

He expressed the hope that the bombardment will bring an end to series of criminals attacks in the locality.

Another resident said, “We woke up this morning with a strange sound of gunshots and a military helicopter hovering around the entire village with fearful sounds. Although we heard information about nobody knew it was going to be that fearful. So, I instructed my wife and children to remain indoors throughout the exercise.

“I don’t know how many people were arrested by the army but what I know is that they carried out an aerial surveillance of the entire community in the LGA.”